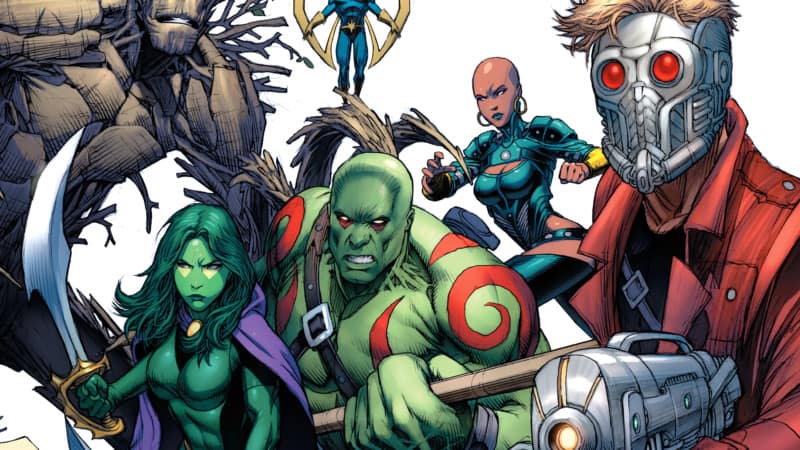 The Guardians of the Galaxy as we know it is gone. The new run in the comics introduces a new line-up, and the team we grew fond of is gone. Well, the thing is, that’s not new to us, and not new to comics. This leads to questions like, are they still the same team even if the members have changed? Can the new comic run of THE GUARDIANS OF THE GALAXY help moviegoers with something that has plagued comic book readers for years: the changing line-ups? 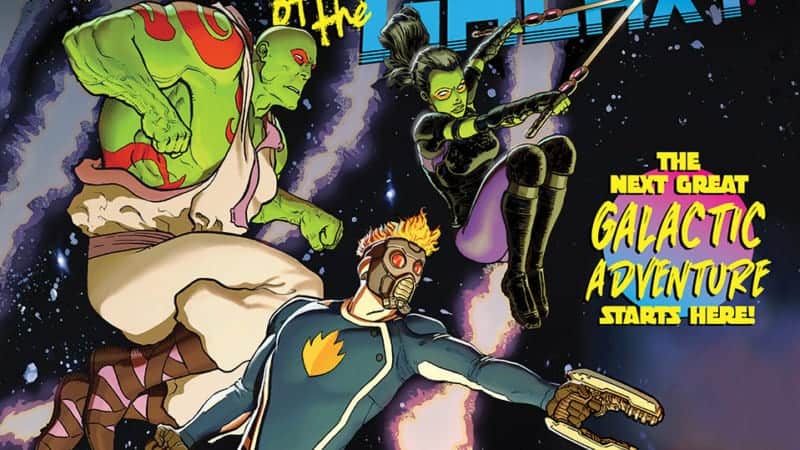 Let’s start with the team that started this question, the Guardians of the Galaxy. We all know them: Star-Lord, Rocket, Groot, Gamora, and Drax. They’re like the BREAKFAST CLUB but with lasers and more emotional baggage. However, the team we all fell in love on the big screen isn’t original Guardians lineup. The original team was Yondu — the only one to play a significant role in the films — Major Victory, Starhawk, Martinex, and Charlie-27.

The first issue of GUARDIANS OF THE GALAXY was published in January of 1969. It didn’t even start in the good 616-Universe (Marvel’s Canonical Universe). It started in Earth-691. The line-up of the team didn’t consist of the characters in the current run of Guardians. The version we know from the movies did exist in the comics, but their characteristics didn’t entirely match up with their MCU counterparts until later down the line.

The team went through changes over the years. The MCU versions didn’t come about until Brian Michael Bendis’ run on the title starting with GUARDIANS OF THE GALAXY #0.1 in February 2013. During his reign, the team would change to add Iron Man, Kitty Pryde, Venom, even characters from different comic companies like Angela from SPAWN. This list just scratches the roster of people inducted under the name of GOTG.

Through the years the GUARDIANS OF THE GALAXY made the jump to the good ol’ 616. Members of the team have made a massive impact on the universe by taking part in major events. Adam Warlock has an important role in the INFINITY GAUNTLET storyline. Star-Lord and Drax were a part of the ANNIHILATION series. If an event storyline took place in space, the Guardians had a role to play.

The Guardians Aren’t The Only Ones

Having a team change but keeping the same title isn’t new to comics. It’s not hard to find examples. THE AVENGERS, X-MEN, and JUSTICE LEAGUE have gone through more members than Thanos eliminated with his snap. There are the DEFENDERS, CHAMPIONS, THE GREEN LANTERN CORP; even villains change like Spiderman’s SINISTER SIX. This isn’t exclusive to the big two either. KICKASS has a new hero under the mask, JOJO’S BIZZARE ADVENTURE changes its line-up of characters all the time.

This isn’t even exclusive to comics. In films and TV, we see line-ups continuously change. LEGENDS OF TOMORROW and AGENTS OF SHIELD have people come and go. POWER RANGERS and THE PHANTOM make it his thing to change who’s under the mask. The most culturally impactful one is encroaching closer to us in ENDGAME, where it’s rumored to be some actors’ last role as an Avenger.

Why Does This Happen?

The reasons for doing this can span an article of its own. From a story aspect, it gives the writer new unexplored paths to follow and keeps the story fresh.  A new creative team can be brought in and want to use their favorite character, or they want to make their line-up memorable during their run. It can even boil down to money. Generally, if a title isn’t selling well, the company may decide to mix things up in hopes of revitalizing sells. Whatever the reason is, it happens.

Okay, But Why Does This Matter Now? 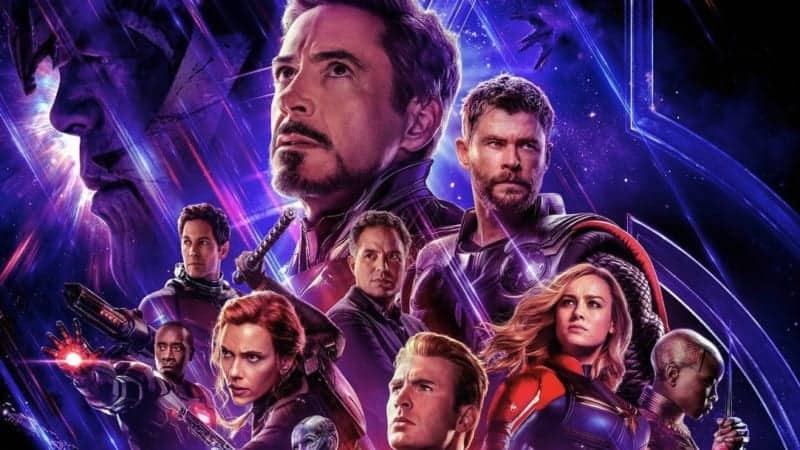 ENDGAME, that’s why it matters. Like the Guardians, the Avengers line-up became familiar to millions of people because of the films. The line-up in the Avengers movies is the Avengers, as much as the Guardians in the film are the Guardians to most. With ENDGAME encroaching, changes to the MCU are inevitable. Contracts are going to finish, and the Avengers’ line-up will change. We will have to face what’s been going on the page for decades on the big screen in what will be the biggest film in our comic culture.

We already had a taste of this in the GUARDIANS OF THE GALAXY VOL 2.  The team gained recruits and suffered the loss of our favorite blue pirate dad, Youndo. Then we had CIVIL WAR dividing the team we grew to love, but they were at least still in the movies. Those films’ effect on their lineup and the whole MCU will seem small compared to what we will face at the end of April.

This hits more than just the AVENGERS. Will the Guardians be the same after ENDGAME? With the recent Guardians drama happening in the real world, even if James Gunn is back in the director’s seat, this is a good time for Marvel to change up the teams. Will Drax move on with the team when his whole mission in life was to defeat Thanos? Can Gamora be brought to life since she was a sacrifice? 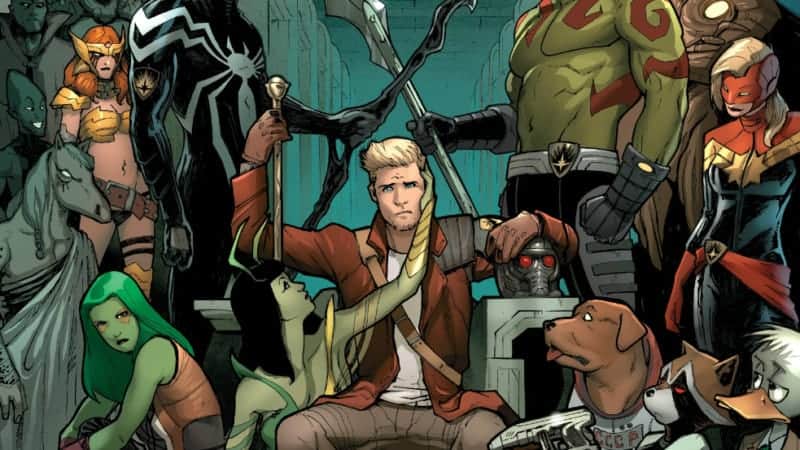 With the state of a team in constant flux, where any character can come and go for many reasons, is it still the same team? Well, that depends on what made them a team for you personally. Looking at the Guardians of the Galaxy, we can see this at work. We discussed how the team has a history of being altered. From universe hopping, to team drastically changing during one writer’s run, the fan base says loyal. The reason is in what made you come to them in the first place.

The GOTG is a space adventure where we explore the cosmos and find new, mind-bending planets. Where the problems they face feel out of this world, but real at the same time. We examine the interactions of the team members. The essence stays the same. Still, would the Guardians still be the Guardians with another talking animal, Cosmo, maybe? Well, it was, and that should speak to its strength.

“Staying true to the core of a property” is what every creative team says when tackling an already established project. When you break a team down to its essential elements, you start to see the reasons why you cared for them in the first place. If you enjoy GOTG for its humor, space adventures, and over the top characters chemistry together, then that’s what the GOTG is to you. If you enjoyed it for the serious themes and issues they tackle through a creative lens, then that’s them to you.

More Than A Name

We come to these stories for the characters, that’s true. We want to grow with them and see how they have changed, but then what if the team itself is a character? The GUARDIANS OF THE GALAXY has changed in its run, but the title itself has matured and found its identity while trying new things. As a reader, we grow attached to a title. Go to any Batman fan and argue the mainline BATMAN COMICS is the same as ALL-STAR BATMAN series, or the first X-MEN movie is the same as X-MEN FIRST CLASS just because it has Professor X and Magneto. Each of those properties shares characters, but the tone and writing are different to the point the title of each series forms its own distinct identity.

The titles have an intrinsical value based on the history and writing style they built over time. The changes to the line-up are the title and team itself growing, just like the characters themselves. It is why we still read a story? Can it be because the title a property carries is as much as a character to the audience as the members filling them? We care about the Guardians, the Avengers, because no matter who is under the banner, that’s who they become. 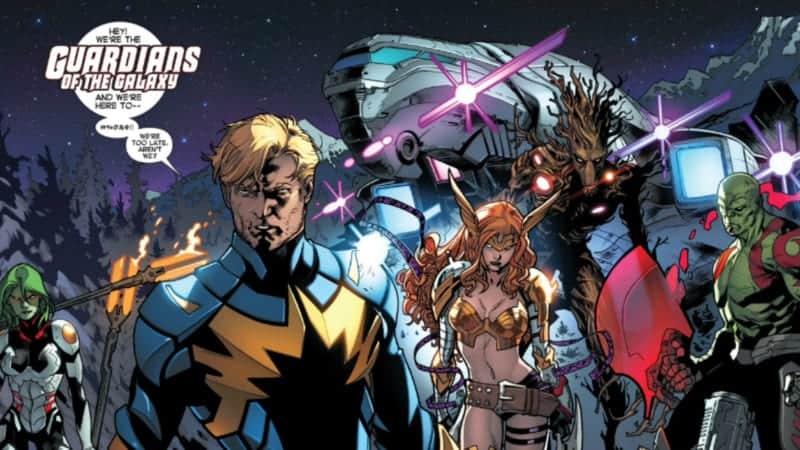 We have been ready for this for years. Comics’ creative teams change hands during a comics run. We have seen our favorite superhero teams evolved, for better and worse. Our community is accustomed to change. That doesn’t mean we always accept it. The new Guardians of the Galaxy comic run marks a shift in many comic readers’ lives, even if they don’t know it. The new team on the pages may change the line-up many have now grown attached to thanks to the movies. However many have started to realize it was more than the members that drew them in.

They see what it has always been: a team of space superheroes defeating cosmic entities and fighting in intergalactic wars with the team made of the craziest ideas. Now we will face this challenge on a new scale. What happens after ENDGAME is unknown and the team we grew to love will change. We saw it fail in comics, but we have seen it work a thousand times as well. All we can do know is remind ourselves why we loved these stories, and wait.