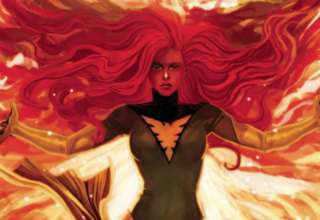 GENERATIONS: PHOENIX & JEAN GREY #1 is a unique time travel story. Like THE TOTALLY AWESOME HULK last week, the current teenage Jean Grey bounces across time to encounter her past self, who holds the Phoenix Force the younger Jean is desperate to avoid. Cullen Bunn creates a unique tale of self-examination and soul-searching — with Galactus thrown in.

Waking Up In The Past

Young Jean Grey awakens in a secluded forest, unsure of how she got there. She emerges on a beach, where her telepathy shows that beach-goers recognize her. She follows their impulses and comes across her past adult self — while also sensing the Phoenix Force inside this older Jean Grey. Bunn establishes the dichotomy quickly as young Jean feels out of place on the beach while adult Jean is clearly comfortable.

Adult Jean senses her doppelgänger’s presence and the two converse. Young Jean acts unsure around her older self, blurting out questions about the Phoenix Force. Adult Jean, meanwhile, attempts to befriend her younger self. It slows the book down a bit, yet Bunn’s writing in this moment highlights the differences between the characters. Young Jean analyzes her older self, seeing how she is trying to push away the pain of losing the X-Men. She also sees herself in Adult Jean and says how much that scares her. It provides a unique view into the characters — Young Jean is weighed down by her potential future and acts more mature than the in-denial Adult Jean running from her past. This functions as an invert of the adult-child dynamic and it’s fascinating to see a younger, future version of a character comment on her past, adult self (the temporal headaches, though!)

READ: Check out our review of the first GENERATIONS title, starring the two Hulks!

Adult Jean decides to answer her younger self’s questions by taking her into space. R.B. Silva’s pencils, along with Adriano Di Benedetto’s coloring, shine as the two Jeans soar through space, with even minor glimpses of the background feeling epic. It’s a testament that even these small details feel powerful, especially with a giant fire-bird in the foreground.

The two Jeans land on a planet that has just been invaded by Galactus. Phoenix rises up to fight the Eater of Worlds, in a battle that rocks the planet itself. Young Jean analyzes her older self, seeing that Adult Jean is merely giving a display of force, not truly protecting the planet. The artwork shines again here, filling the cosmos with energy bolts and a real feel of gods battling.

That desire to show off turns on Adult Jean, as Galactus begins to siphon the Phoenix Force. Young Jean manages to free her older self, and the two space Titans leave at a draw. Adult Jean calls the Phoenix a protector, but Young Jean wrestles with telling her the truth about what is to come. Then someone else comes to speak his piece.

READ: Why is the Phoenix so terrifying? We examine the symbolism of Dark Phoenix!

The Watcher’s words epitomize the pressure Young Jean feels and her fear of the Phoenix. GENERATIONS: PHOENIX & JEAN GREY #1 has its strongest moment here, as Adult Jean asks her doppelgänger what is to come. Young Jean, given this opportunity to possibly change her own past…refuses to take it. Despite all her fears, she decides that the past has to be what it is, for the sake of her present. It’s a moment that shows her ability to face her fears and not let them control her actions. The Watcher sums it up, before Young Jean returns to her own time:

“For so long, you have believed you had no control over your fate. But in this moment, by letting time play out without your interference,

You are in total control.”

GENERATIONS: PHOENIX & JEAN GREY #1 is a unique entry. At times, it felt like Doc Brown would have a field day playing temporal psychologist with the Jeans. The issue meanders slightly in the beginning and has a lot of analysis. However, its strength lies in keeping Young Jean and her fears in focus. Her need to escape the Phoenix and what it represents drives her, but this issue shows that it is possible to keep fear from grabbing the wheel. GENERATIONS: PHOENIX & JEAN GREY #1 is another strong entry in the GENERATIONS series.