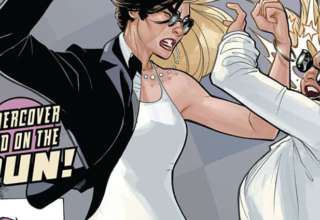 A lot of comics tend to gloss over the smaller aspects of a superhero’s daily life. After all, Superman might be faster than a speeding bullet, but I doubt he can do anything without drinking a cup of coffee in the morning. These little actions make the otherwise god-like heroes vulnerable, like you or me. Capturing this is not just important, it’s essential. As such, GENERATION X #7’s ability to do this really helps elevate this comic from good to great in my eyes. Written by Christina Strain, drawn by Eric Koda, and colored by Felipe Sobreiro, GENERATION X #7 manages to capture the subtle nuances of teenage drama while still telling a grandiose story.

GENERATION X #7, Or When a Dinner Party Goes Wrong

Picking up right where GENERATION X #6 left off, we see Quentin, Benjamin, and Nathaniel at the Kilgore Industries auction. Andrea and Andreas Strucker, better known as the Fenris Twins, have just bought a container supposedly housing nano-sentinels that could eradicate almost any mutant. In order to stop this weapon from falling into such dangerous hands, the boys team up to steal this container. Meanwhile, Jubilee laments to Jono about the struggles of being a vampire and having to redefine what it means to be “normal” in this state.

While this story seems to revolve around action-packed moments, it’s actually quite subtle. The boys must act sneakily to get the canister of nano sentinels back. There’s this constant fear of getting discovered that looms over the whole operation. It makes for some genuinely enjoyable suspense. Though, personally, my favorite moments of this issue focused on the boys just talking about their inter-connected personal lives.

It’s made clear some romantic drama’s going on between the boys and it doesn’t feel forced at all. Quinten realizes Benjamin has strong feelings for Nathaniel, yet due to Benjamin’s shyness, he has trouble expressing that. This inherent awkwardness of being a teenager and experiencing emotions of desire rings true through these pages. The characters are no longer just drawings of people on a page; they’re me. I wanted to hug Benji as he tries desperately to get on Nathaniel’s good side. Teenage drama like this makes X-MEN comics great. For these aren’t adults, they’re kids. High school is messy and confusing and often it takes a while to figure out who you truly are. I appreciated the comic setting up that kind of narrative and I look forward to seeing where they take it.

There’s no denying Eric Koda’s ability to draw. His shading on each character really highlights their distinctive features down to the cheekbone. Yet while I admire his handiwork, I often felt he made the boys look a bit too adult. They all seemed riddled with muscles and definition that had me second guessing all of the teens I knew at their age. I know part of this stylistic choice is that it’s common for superhero characters to be seen as idealistic body forms, yet they’re still kids. I was hoping GENERATION X #7 would embrace the more awkwardness of teens that the comic managed to capture so well in their interactions. But instead, the kids look like any other ideal superhero.

Felipe Sobreiro is the colorist on this project. He does a swell job of showcasing this vibrant world. Instead of dreary colors that would normally overtake this serious plot, Sobreiro fills the panels with bright blues and vibrant yellows. Each of the characters contains distinctive color patterns that really helps them pop out to the reader.

Despite the minor gripe about the way the teen characters look, GENERATION X #7 surpassed my expectations with its story and character development. With genuinely endearing characters and a suspenseful narrative that’ll keep readers on the edge of their seats, it’s hard to believe this series isn’t talked about more. If the team keeps up quality work like this, then I could see GENERATION X becoming the 2010s NEW MUTANTS.