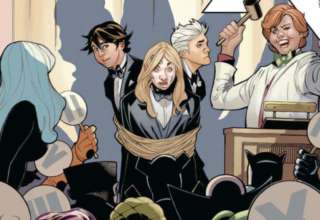 The teenage soap opera of GENERATION X never fails to entertain both new and long-time fans of X-MEN books. GENERATION X #6 appears to continue this trend with this all-new installment. Written by Christina Strain and drawn by Eric Koda, the students of the Xavier Academy find themselves once again at odds with some horrible mutant foes and each other.

The story begins with the sentiment edamame piece, Doop, giving a lecture about the woes of dating as a mutant. While Doop lectures, Benji falls asleep in class causing Nathaniel to ask Quentin about his nightly habits. At first, Quentin refuses to tell him anything. Yet when Nathaniel reads his mind, he learns Quentin drags Benjamin out every night to various bars for his own amusement. Nathaniel then meets with Benji to try and persuade him to stop hanging out with Quentin. But he explains that Quentin is in a bad place and really needs the help of his friends. So in the end, Benji, Quentin, and Nathaniel find themselves going to a dressy auction event run by Kade Kilgore. At the same time, Jubilee goes on patrol with Jono. The two talk and Jubilee reveals she may not be as comfortable being a vampire as she lets on.

The story does an excellent job setting up the future teammates Benji, Quentin, and Nathaniel. Their characters naturally work well off one another even if that doesn’t mean they work together as a team yet. Nathaniel has taken on this strange, big brother role for Benjamin that honestly fits him quite well. He can read minds and generally understand those around him; it makes sense he’d look out for others. Quentin, on the other hand, is a beautiful mess. He doesn’t seem to understand how his actions negatively impact others. Which, for now, works. It’s still early in the run, and he has a lot of growing to do.

READ: Missed the previous issue? Check out the review of GENERATION X #5!

My only real narrative complaint pertains to Jubilee and her relationship with the kids. From my understanding, she’s supposed to be their primary teacher. But, save for the first two issues, she hasn’t really mentored these students. I understand the writers are probably leading up to something larger than I can anticipate, yet it’s been a few issues. It just seems odd that their teacher leaves them to their own devices to go to dangerous auctions.

How to Show an X-Man

I like Eric Koda’s general style. He designs the characters in a classic, hyper-reastic format which makes me think of the older X-MEN comics. Though at times, there’s some odd shading on the characters faces that is a bit distracting. Yet the realstic appearance works for me since it helps bring me into this world. When Quentin, Ben, and Nathan go to the auction, I marveled at how well designed each of their fellow patrons were. There seems to be this vibrance in the scene as a whole that you just don’t get with comics these days. The hyper-realism also plays into the favor of the very real emotions of the characters. When Quentin feels useless and alone, his face droops in a way that made me want to give him a hug. All in all, it’s the perfect look for this kind of comic.

READ: still don’t know if GENERATION X is right for you? Check out why you should read it!

GENERATION X #6 is, at its core, a beginning. It sets up the pins for an exciting adventure others issues will doubtlessly knock down. It also helps establish a team dynamic that, while lacking real formation, has roots already starting to spread. A perfectly enjoyable entry into this already fantastic series, GENERATION X #6 further delves into the trials and tribulations of being a teenage mutant.