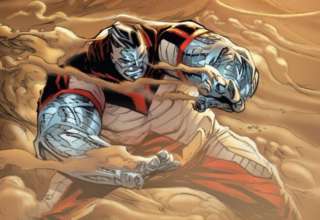 EXTRAORDINARY X-MEN #9 is the untold tale of what happened to Colossus and his students after their leap 1000 years into the future. And while it’s emphasis on the book’s supporting characters comes off fresh and delighting, the story arc visibly suffers from how it’s barely innovative.

Immediately after their accidental time-travel, Colossus and his students, Ernst, Anole, Glob and Martha, encounter the era’s Four Horsemen and quickly get into a fight. After Piotr stays behind to save the lives of his Protégées, the young X-Men are on their own in a mysterious future in which nobody seems to be particularly nice to mutants. While this concept of a potential future has features that distinguish it from other time-travel escapades – a lot of which will surprise you – there are many aspects that just seem a tad too familiar. Writer Jeff Lemire and his colleagues have made the questionable decision to go with another extinction of mutantkind storyline, which means they will have to put up with comparisons to X-Men stories, such as MESSIAH COMPLEX. The charm of time-travel stories, unfortunately, gets lost as soon as they become predictable, and that’s definitely an issue, not only in this series or franchise, but within the entire genre.

After several time-jumps, we get to see the entire year of the students journey. And the reader actually gets a glimpse of how the teenagers grow more intimate with one another and how their adventures help them grow. Still, I felt like the characterization of some of the young mutants, especially Ernst, could have been more insightful and specific; Ernst has been characterized only with her affection towards Martha and her role as a translator for years. Plus, when the team has to run from a 3 foot tall red carnivore goblin creature that refers to itself in third person, it just feels too out of place and obscure to be taken seriously. All things considered, the fact that Lemire pulls off a predictable yet fun issue shouldered exclusively by supporting characters only proves that he shouldn’t have a problem with managing a larger cast of mutants and giving each of them their due consideration.

Artist Humberto Ramos leads us through this very diverse future scenario, and the beautiful colors by Edgar Delgado make it all the more enjoyable. The artistic weak point is, surprisingly, the action scenes. Ramos’s previous work on AMAZING SPIDER-MAN and NEW X-MEN had much clearer fights that were extremely dynamic and riveting. In the recent issues of EXTRAORDINARY X-MEN, it is difficult to figure out what exactly is going on in each battle.

As part two of the larger event/story arc, APOCALYPSE WARS answers some questions but raises a whole set of new ones. While it does keep me thrilled to check out future issues, its last few pages come off as rather anticlimactic and ends at the exact same place as an issue earlier.

EXTRAORDINARY X-MEN has many artistic and narrative strengths and weaknesses and makes us tired of the concept of time-travel in superhero comics. However, it is still worth checking out if you’re a fan of Lemire’s work on his supporting mutant characters.