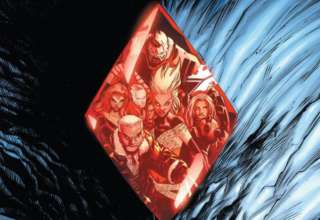 EXTRAORDINARY X-MEN has, thus far, been a book that many have criticized for having a slow pace. Things finally pick up this issue, though, after Colossus realizes what horrible plans Sinister has for him, his sister, and Jean. Logan and the other X-Men manage to defeat the demons of Limbo and secure X-Haven once again, before the team unites in a battle against the Marauders – only to find out about the entirety of what — or whom — Essex has been experimenting on…

CLICK: Our review of the last issue of EXTRAORDINARY X-MEN!

As the plot thickens in EXTRAORDINARY X-MEN #4, some of the issue’s plot points can’t help but feel rushed. The end of the battle for the safety of the X-Haven refugees comes really abruptly. The comic even chooses to deal with it in a joking manner, but the humor feels out of place. It makes the entire battle — a battle which lasted one and a half issues and had countless mutant lives hanging in the balance — seem like far lower stakes. The book also struggles to find the space to explain the main villain’s intentions. This may be the second to last issue in this arc but,it was the first to actually give Sinister his fair share of screen time. The fight against the Marauders is over as soon as it begins, and it makes you realize that this issue just hasn’t got enough pages for the amount of plot it’s supposed to carry.

Overall issue #4 feels like it’s trying to make up for the pace of previous issues, but now that the plot has finally gathered some speed, it feels rushed. Which is a shame because what Lemire seems to be planning when it comes to the Mutants/Inhumans storyline and Sinister’s role in the conflict is really interesting. Essentially, this week’s cliffhanger is probably the main selling point, though. Those who have not been spoiled by social media will find themselves speechless as they witness… [spoiler title=’Spoiler!’ style=’default’ collapse_link=’true’]the return of Cyclops as one of Essex’s test subjects- half Mutant, half Inhuman, which is tragically ironic, given his attempted attack on the Inhuman race that in turn made him responsible for Mutant sterilization. I don’t have much to go on here, but it’s pretty likely that what we see here is only a clone of Scott. Either way, this is an amazing twist in the story that nobody expected. Say what you will about Lemire, but he has been able to drop massive surprises on us several times during this arc.

READ: Want to know more about Cyclops? Here’s our analysis of his character arc! [/spoiler]

There are quite a few interesting character moments in this issue – even though some of them seem kind of stiff. The Iceman/Anole scene is pretty cute, but the dialogue is just too wooden – something Lemire has struggled with several times during his run. We’re finally getting an idea of what the author has planned for the character of Nightcrawler, too, and it makes me extremely curious to read #7, which will, based on the previews, delve a bit deeper into Kurt’s psyche.

The art by Ramos remains a high point, even though he has apparently decided that there’s no need to draw faces for some of his characters.

It may be due to deadlines, but I can’t help but feel that more and more his art is lacking detail as the arc progresses.

All things considered, EXTRAORDINARY X-MEN #4 is not a bad issue, but is definitely one of the weaker ones in this run, suffering from weird pacing, wooden dialogue, and art that doesn’t showcase Ramos’ best work. Despite all of that, though, as a reader, I can’t help but be curious about what’s to come.

CLICK: Want to read more about the X-Men? Here’s our review of ALL-NEW X-MEN #2!