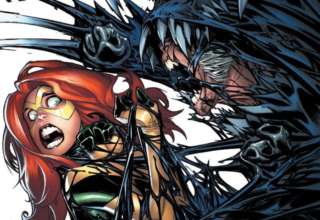 Lemire and Ramos deliver a rather action-packed next-to-last chapter to their APOCALYPSE WARS arc in EXTRAORDINARY X-MEN #11. And while they finally bring a beloved mutant back into the spotlight, a lot of the storytelling flaws from previous issues have made their way into this latest entry.

The Extraordinary X-Men are still trapped in an apocalyptic future in which mutantkind is nearly extinct, stuck in a fight for the survival of their species. In trying to recover thousands of mutant embryos, Storm needs the help of one of her oldest mutant friends: the fuzzy elf Nightcrawler! And their relationship is the focus of the latter half of the issue. Lemire nails the intimacy between these two founding members of the second generation of X-Men, and the reader gets the sense of trust they have for each other. Overall, though, his characterization leaves a lot to be desired.

The transitions of Nightcrawler from the cheerful fuzzy elf to traumatized and to a person who’s willing to give up his moral beliefs just weren’t smooth and organic enough. Towards the end of the issue, Nightcrawler acts in a way that is rather shocking to readers that have known him over decades, and it would have been nice so see a natural progression of the character. This way, it just comes across as pretty unbelievable.

Colossus, having become a Horseman of Apocalypse in previous issues, still isn’t given anything but standart lines about the survival of the fittest. Let alone the fact that storytelling-wise, this was very redundant to do in the first place – given that he was already possessed by both the Juggernaut and the Phoenix Force in recent years. Probably still less redundant than having Old Man Logan be taken over by the Venom symbiote, because even though it’s advertised on the cover as a main selling point, Lemire barely does anything interesting with it. None of this book’s character work feels as earnest or compelling to the reader as it should. This is an X-title, after all, and three-dimensional characters have always been a main selling point.

All the while, this issue presents the reader with relatively dull fight scenes. Which is problematic when more than 50% of the issue consists of those fight scenes. Horsemen and X-Men just throw one-liners or clichéd sayings at each other while fighting over the obligatory MacGuffin device. What this arc lacks is an exploration of the themes at hand that is more than just superficial. What makes mutant survival intrinsically good or bad? What makes these characters so passionate in fighting for or against it? What kept me interested in the read was the Illyana/Sapna subplot. Magik’s protégé is in a similar position she found herself in not too long ago, a great example for her character progression.

Humberto Ramos’ art is at its strongest when it establishes shots or in one-on-one combat scenes, and the issue is, overall, beautiful to look at. Few artists manage to portray Nightcrawler’s Bamfing as kinetically as he does, and overall, as always, there’s a lot of motion between the panels.

EXTRAORDINARY X-MEN #11 is probably the epitome of why I feel so indifferent about X-MEN comics lately. While it is by no means a bad comic book, for an X-title, it leaves a lot to be desired. Themes should be consistently explored and thought-provoking. Character work should be believable and relatable, not clumsy and repetitive. And while this issue has a few redeeming moments, overall the APOCALYPSE WARS arc fails to mesmerize me as a passionate fan of the franchise.