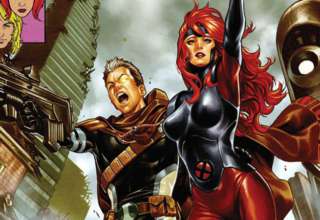 In EXTERMINATION #4, Ed Brisson gives crucial backstory and writes some superb dialogue. As Ahab makes his way to Searebro to hunt Cyclops, young Jean Grey and the X-Force invade the younger Cable’s lair. Their visit is quite illuminating, to say the least. Cable’s backstory is the highlight of this issue. We finally learn his motivations and what exactly he’s doing with his captured X-Men. I truly enjoyed everything with younger Cable in this issue. Brisson kills it whenever he writes that character.

The rest of the issue is also top notch. The action scenes look stunning thanks to Pepe Larraz and Ario Anindito’s art. One page, in particular, looks just fantastic. Overall, EXTERMINATION #4 is another solid entry in this exciting event mini-series.

The Raid on Cable’s Lair in EXTERMINATION #4

In the last issue, Ahab turned Old Man Logan, Shatterstar, Rachel Grey, and Nightcrawler into his hounds and enslaved them. They fought the X-Men and the X-Force, but luckily they didn’t take any casualties. Meanwhile, the newly reunited X-Force team, along with Jean Grey, tracked down the young Cable who’s been kidnapping her Original Five teammates. EXTERMINATION #4 opens with Ahab preparing to raid Searebro in order to find and kill young Cyclops. As he does this, the X-Men recuperate after Ahab’s attack. They head to Searebro as well, hoping to arrive before Ahab. As they leave, Jean and the X-Force attack Cable in his lair. The X-Force want to kill him in order to avenge the older Cable’s death, but Jean wisely wants to talk things over first. She telekinetically halts the fight, and Cable reluctantly agrees to show her what his mission is.

He explains that he comes from a future where Ahab successfully kills one of the Original Five, Bobby in his timeline, which leads to chaos. Since one dies in the present, they can’t come back to the past. Because of this, the X-Men fail to win their many battles in their early years, turning the public against mutants much sooner. This leads all mutantkind to be wiped out prematurely. But why did Cable kidnap some members of the Original Five? And will Jean buy his story? Pick up EXTERMINATION #5 to find out!

Brisson manages to answer one of the biggest dangling questions of the series incredibly satisfyingly. Throughout the series, I’ve been worried that the young Cable would be a purely evil character, looking to kill the Original Five before Ahab. I’m happy I was wrong. It may be one of the oldest tropes in comics — the misunderstanding leading to a team-up — but I feel that it works quite well in this instance. Making Cable into a younger, brasher, but still more-or-less heroic character is a welcome change of pace. Older Cable died and came back to life so many times that his appearances became confusing. Not to mention the mess that is his backstory. This brings a fresh new take to the character, shaking off the baggage of his prior incarnation.

It helps that Brisson writes the character quite well. He’s overconfident and quick to anger, but he also clearly has some good in him beyond that. Since Brisson is writing him in the new X-FORCE series, I’m excited to see where he takes the character. It also a good nod to the era when Cable and his team were most popular — the ‘90s. A cocky, more violent younger version of a character would be right at home in Fabian Nicieza and Rob Liefeld’s extreme run on X-FORCE. Hopefully, Brisson will continue writing the character in X-FORCE as well as he does in EXTERMINATION #4.

In EXTERMINATION #4, Ario Anindito pencils Pepe Larraz’ layouts. Each page looks drop dead gorgeous. The action scenes have tons of kinetic energy bursting from the panels. However, the best two pages of the book, I believe, are a double page splash showing the potential future Cable comes from. There’s so much to love from the page. For one, Anindito’s interpretations of classic X-Villains look, of course, amazing. Magneto, with his face obscured in darkness under his helmet, looks appropriately malicious and foreboding. Ahab and his hounds look chilling, with his cold, dead stare combined with the hounds’ crazed, animalistic expressions. Larraz’ layout of the pages adds another great layer to them. Cable and Jean floating through the background images is an interesting way to convey the mind-space where Cable shows her his visions of the past and future of his alternate timeline.

EXTERMINATION #4 is another fantastic issue of this series. It’s even better than the last issue. X-Men fans seriously need to pick up this action-packed book.