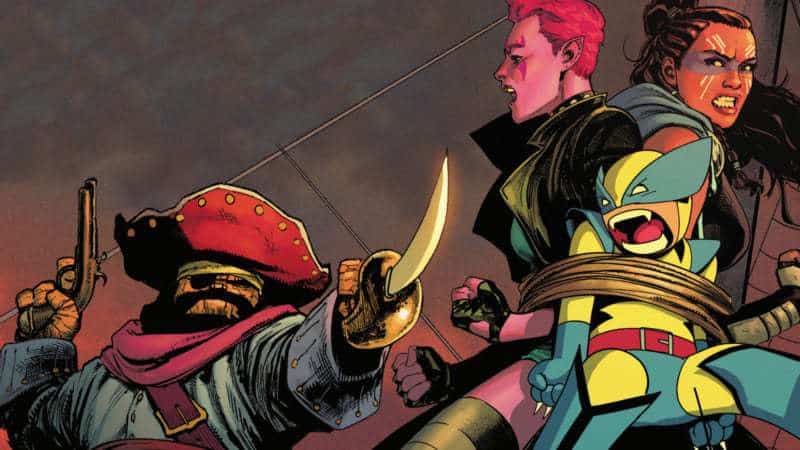 The Exiles are hitting the high seas in the newest issue of the reality-hopping series. Written by Saladin Ahmed and illustrated by Javier Rodriguez and Chris O’Halloran, this issue of EXILES is all about the pirate’s life. According to the preview for EXILES #4, the team finds themselves on an island after narrowly escaping the impact of an atomic bomb. Thanks to the team’s Tallus (the object that allows them to jump from dimension to dimension) the Exiles are usually pretty good at last minute retreats — even if those retreats send them to distant, foreign realities.

In the preview for EXILES #4, the Tallus is broken…which means the team is stranded. To make matters worse, it’s the year 1760; pirates, slave-holders, and generally awful people are rampant. But, inter-midst this jarring reality change, Blink notices a familiar face. The Thing from the Fantastic Four is (in this dimension) Blackbeard!

Walking the Plank in EXILES #4

EXILES #3 dealt with some pretty serious topics. From atomic bombs to multi-verse destroying monsters, the Exiles haven’t had it easy. With so much seriousness, it’s good to see Ahmed bringing a bit of lightness to the fantastical world of the Exiles. Don’t get me wrong — this issue could definitely have some serious and important topics. Just in the preview, the team touches on some very real issues like slavery and survivor’s guilt. Still, with Ben Grimm dressed as a pirate, I highly doubt things will get too grim (no pun intended).

Writers definitely need to discuss serious things in comics, but I really like that EXILES frequently offers a sort of fantastical oasis from the “normal” comic book. Characters like Wolvie take readers away from the harsh world of X-Men comics and into a secret hideaway. Ahmed completely warps the typical Marvel comics world and while sometimes that can be deadly, it can also be a lot of fun. The Thing’s Blackbeard could become the Exiles’ newest enemy…but something tells me he won’t. I think Ahmed is giving the Exiles some time to regroup while also getting to meet some “old” friends.

Check out our preview pages for EXILES #4 below. EXILES #4 is coming out on June 13th.