There’s arguably no better time than right now to be a comic book fan. With the rise of film adaptations from both Marvel and DC, fans certainly have no shortage of options when it comes to seeing their favorite characters on-screen. While the big screen has been home to many of our favorite heroes lately, TV has slowly embraced them as well. With the popularity of series such as DAREDEVIL and JESSICA JONES on Netflix and the recent popularity of UMBRELLA ACADEMY, comic books are having just as much if not more success on TV. Here we break down is TV the best place for comic book adaptations? Read on to find the answer!

Can We Get More of What We Want to See?

For most long-running comics or graphic novels, the biggest question is will I see my favorite story or moment up on the screen? With a film adaptation, there can be more pressure to pull these moments off.  With a TV adaptation, there’s more room to explore the full story arcs and flesh these moments out. A prime example being the 2003 version of DAREDEVIL against its Netflix counterpart. The 2003 film was crammed with Kingpin, Elektra and Bullseye for mixed results. The Netflix series managed to include them and give each a proper narrative resulting in more screen-time and plot development. The biggest advantage here is how in Seasons 1 and 2 Elektra and Kingpin were given full arcs that allowed them to take on key roles. 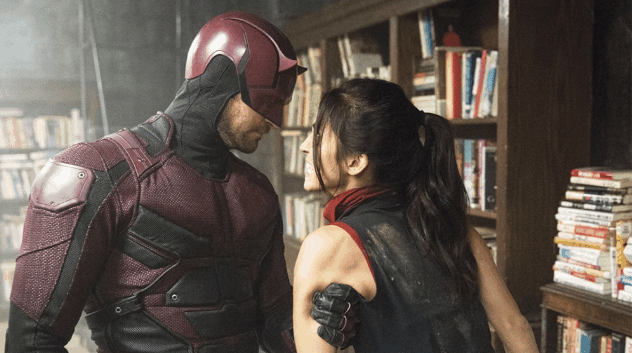 Another benefit here is that TV adaptations mirror the structure of comic books more closely. This will allow for stories to feel more accurate visually and plot-wise. This approach is showcased well in the DEADLY CLASS series, which leans heavily on Wes Craig’s visual storytelling. Each episode incorporates Wes Craig’s own artwork to deliver information and establish our characters. The introduction of Marcus in the pilot visually resembles the comic quite accurately. By using the small-screen format, comic book adaptations have a greater ability to capture the visuals and style of their source material.

Can TV Improve The Source Material?

One of the luxuries of TV is being able to revisit your favorite characters week after week. With TV versions of comic book stories, That gives us more time to not only get to know our characters but their respective worlds as well. In the case of recent adaptations such as UMBRELLA ACADEMY, this approach allowed us to get closer to Spaceboy, Klaus and Vanya and Number 5 in ways a movie wouldn’t have time for. The series route also allowed viewers to get more drawn into the universe of UMBRELLA ACADEMY too. By having the liberty to revisit our characters and their worlds episode by episode, viewers can get a fuller experience overall.

In some cases, the serial aspect of Television can improve upon the source material. With UMBRELLA ACADEMY, Vanya got a bigger focus in the series than she did in the comics. Her subplot with Leonard flushed her transformation into a white violin. Other characters such as Klaus and Luther were also more developed. Klaus’s Vietnam sub-plot added depth to his arc and Luther’s relationship with Allison was expanded upon. Thanks to its presence as a Netflix series, UMBRELLA ACADEMY was able to further expand the universe and build upon its source material. This is an example of how TV can not just faithfully adapt comic book series but improve upon them as well. 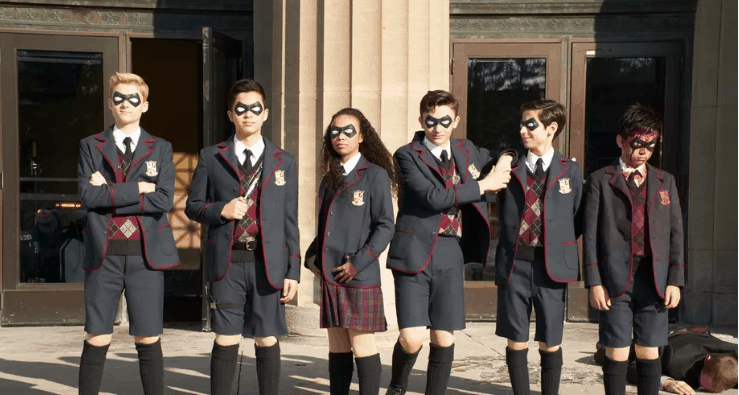 Adapting a comic book series can be quite an undertaking. Dealing with expectations from fans and critics alike is one of the many challenges these adaptations face. TV Adaptations, however, have more room for creativity at times. This added sense of freedom allows TV adaptations to take more risks than their cinematic counterparts. The FX series LEGION based on an X-MEN character is quite daring in its visuals.

The show contains surreal visuals and psychological storytelling. The pilot episode of LEGION contains many stand-out moments including a trippy dance sequence with all our characters.
A noteworthy arc from season 1 is David grappling with his childhood fears as his powers manifest. Adaptations such as LEGION are examples of how TV can allow for greater storytelling free from the blockbuster formula. Another recent example is DC’s DOOM PATROL which relies heavily upon the absurdity and dark humor of the Grant Morrison run. 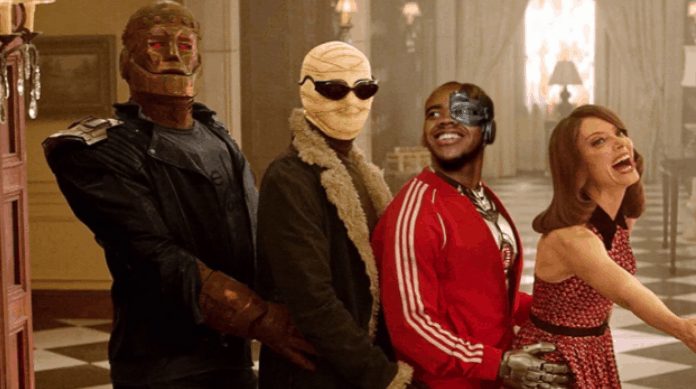 A film adaptation of DOOM PATROL would potentially have to live up to mainstream expectations. Due to it being on DC’s Streaming service, DOOM PATROL can stay truer to its roots. DOOM PATROL as a series has more space to explore Cliff Negative Man and Crazy Jane’s dynamic with one another.  The overall personality of Grant Morrison’s run is present in both the series humor and its visuals. As a series, DOOM PATROL is highly reminiscent of its source material in plot, style, and character. These two series are examples of how TV can allow Comic Book adaptations to take more risks.

Is TV The Future For Comics?

There appears to be no shortage of comic book properties anytime soon. While blockbusters will most likely always be staples for superhero films, we shouldn’t count out the small screen.   It seems that more networks are willing to take chances on comic book series. I-ZOMBIE, CHILLING ADVENTURES OF SABRINA, and SWAMP THING are all either existing or developing projects.

The diversity of comic book series on TV proves that the market is embracing the medium. Comic book adaptations are increasing in popularity these days. While comic book films will endure, television comic book series have proved themselves equally popular and successful. Thanks to the advantages of TV, Comic book series have more creative freedom than ever before. If the next DC or Marvel blockbuster may not even be in cinemas at all, it could very well be in your living room. Either way, that’s still pretty super.