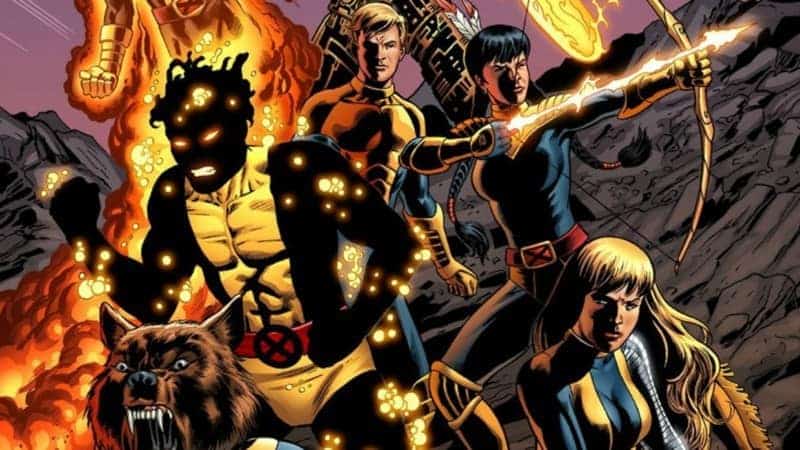 With the post-Fox/Disney-merger, we’re ushering in an era of unfamiliar X-Men faces. But who exactly are they? Each of the members of NEW MUTANTS has a pretty lengthy backstory. Since the cast list is relatively short, we might consider which details director Josh Boone could potentially incorporate into the film.

Boone has given life to movies like STUCK IN LOVE and the popular THE FAULT IN OUR STARS. How could he bring that same flare to the members of NEW MUTANTS?

Powers: Telepathy and energy manipulation, as well as being able to create illusions of others’ fears or yearnings.

In the Comics: Native American Dani Moonstar’s powers manifest when she mistakes a vision for a nightmare. In said vision, an entity in the form of a demonic bear kills her parents. By no coincidence, her parents mysteriously disappear, and her grandfather dies. Moonstar is taken in at the X-Mansion, where she becomes co-leader of the New Mutants (shared with Cannonball).

She also forms a deep friendship with Wolfsbane during her stay at school. Eventually, the demonic bear attacks Dani outside the X-Mansion. This results in the X-Men rushing her to the hospital with a damaged spine. But while she’s away being treated, Magik visits the future and foresees Dani dying. The New Mutants must assemble to save Dani.

NEW MUTANTS Outlook: The trailer makes us wonder, “Why are the kids in a mental asylum?” Possibly, the gang accidentally sends Dani to an unethical doctor (Dr. Cecilia Reyes, shown in the NEW MUTANTS trailer, who gives off an ominous vibe as she performs tests on the kids). After all, Professor X isn’t alive (in the current film franchise) to read Dr. Reyes’ mind and figure out her intentions.

It’d make sense, then, for the other members of NEW MUTANTS to show up at the hospital as part of a rescue attempt. It’s unclear if we’ll see Dani fighting with the demonic bear since the trailer doesn’t show it. However, the trailer does include figures pushing in towards Dani through the walls of her hospital room. These could represent souls enslaved by the demonic bear, trying to get into contact with Dani.

In the Comics: The polite Sam Guthrie grows up in Kentucky with his large family. He suffers the loss of his father, which instigates his powers to be unveiled. While working in a coal mine, the mine begins to collapse. Sam uses his flight ability to save both his fathers’ friend’s life as well as his own.

The Hellfire Club then recruits him in a mission against the New Mutants. However, Sam rebels and is asked by Professor X to join their team. While co-leader of the New Mutants, Sam becomes good friends with Sunspot (despite their opposite personalities). He also adopts a brotherly love for Wolfsbane.

NEW MUTANTS Outlook: Sam’s backstory as one of the members of NEW MUTANTS will be utilized almost in full since the part of Thomas Guthrie (his father) and two ‘coal miners’ are cast. Let’s not forget the trailer shows Sam’s arm in a sling. Maybe this signifies that the accident in the coal mine happened recently. The only thing I think Boone will exclude is the Hellfire Club mercenary mission.

It’d simply be too much information for the first movie in a new X-Men era. Without a doubt, I think we’ll see some overprotectiveness from Sam toward Wolfsbane. I’m curious to see whether or not they’ll execute the unconventional bromance between Sam and Sunspot considering the movie is a horror, and typically bonds like this are more fitting for comedy.

Powers: Harnessing solar power and being able to absorb/channel it in certain ways. Also has super strength and flying abilities.

In the Comics: Originating from Brazil, Bobby is scouted out by the Olympics as a star soccer player. He’s a hothead in personality and is impulsive in his decisions. During a competitive soccer game, racist members of the opposing team provoke Bobby into fighting them. On the losing end of the fight, Bobby’s powers take over: suddenly turning him into a solid black being of solar energy.

This terrifies everyone except Bobby’s girlfriend, Juliana. In a later fight, the Hellfire Club kidnaps Juliana and uses her as leverage. Bobby sets out to rescue Juliana in a battle with the Hellfire Club. Then afterward, Dani Moonstar rescues Bobby from the battle, and he joins the New Mutants.

NEW MUTANTS Outlook: While this backstory is a great one and (in my opinion) the coolest of all the members of NEW MUTANTS, I can’t see Boone incorporating it into the film just yet. Judging by the trailer, it seems like Dani Moonstar will be the main focus of the film.

That might not leave Sunspot any room for character background. But at the very least, Boone has the opportunity to nail his personality on the head, which is something to look forward to. Maybe Sunspot will reference his traumatizing past and or act as though he’s in debt to Dani in some way, but if not, then eh. There’s enough going on in the film already.

Powers: Shape-shifts into a wolf at will. Increased sense of sight, smell, and hearing. Retains animal strength and agility.

In the Comics: Rahne’s father, Reverand Craig, raises Rahne to believe she’s an orphan. He treats Rahne abusively with uptight religious beliefs. One night, Rahne’s powers turn her into a werewolf. Scottish townies believe she is possessed. Reverend Craig leads a mob, chasing Rahne across town and intending to kill her. After the chase and now back in human form, Rahne is rescued by a doctor who brings her to America.

Rahne attends school at the X-Mansion, becoming one of the members of the New Mutants and thus developing her crush on Cannonball. She also forms her friendship with Dani Moonstar, with whom she has a psychic link to in wolf-form. Also to note, Rahne’s religious background makes her a bit uncomfortable around Magik, who blatantly defies religion merely through her existence.

NEW MUTANTS Outlook: NEW MUTANTS might focus on Rahne’s past since Reverand Craig is one of the only cast members listed for the film. Maybe it’s him, in the trailer, with the creepy smiling mask. I’m not sure if the film will go into detail about the first time Rahne became Wolfsbane, though. It might just involve Reverend Craig in the present day.

If the aforementioned rescue mission isn’t in the cards for the plot, then I could see Rahne and Dani being together in the hospital for some other reason due to the fact that they’re so close. Do they seek out medical attention from Dr. Reyes on their own? I feel like the movie will focus more on the friendship bond between these two girls than on the potentially romantic one with Wolfsbane and Cannonball.

Powers: Sorceress who can teleport through time and space. Has armor that gives her super strength. Possesses a “psionic shield,” which makes her mind unreadable to other mutants.

In the Comics: When the X-Men recruit her brother Colossus, the Soviet-born Illyana goes with him to the X-Mansion. However, she is soon captured by an authoritative sorcerer named Belasco. Belasco takes Illyana to Limbo, an alternate world, where he trains her as his apprentice.

While there, Illyana receives advice from the astral forms of Storm and Kitty Pryde. Illyana eventually defeats Belasco when she manifests the Soulsword by way of her mutant powers. Afterward, she returns to Earth, finding that only moments had elapsed despite being in Limbo for years. The now thirteen-year-old Illyana forms a close friendship with Kitty and joins the New Mutants.

NEW MUTANTS Outlook: Magik has an extremely complicated past, given that she grows up in an alternate world and then returns to Earth as a teen. I can’t see NEW MUTANTS including much detail on her backstory since it already focuses heavily on Dani Moonstar and Cannonball. The only thing that might stand out is the use of Magik’s Soulsword, which is said to “disrupt magic spells and beings.”

Could this come in handy if Magik helps Dani defeat the demonic bear for good? If NEW MUTANTS is about the teens honing their powers, maybe the film will include Magik manifesting it in the asylum, rather than in Limbo. In short: other than the appearance of her weaponry, Magik’s story will probably be yet to come.

Members of NEW MUTANTS: the Takeaway

Each of the members of NEW MUTANTS comes from a pretty complex (and, not to mention, diverse) upbringing. And although Boone will undoubtedly align NEW MUTANTS with similar aspects of their comic book childhood, it’d just be an information overload if he tried to explain each of their backgrounds.

I think this is probably the reason he’ll focus more on Cannonball and Moonstar than the others. Especially since the film’s genre is horror. Too much information would bog down from the thrill. However, it’s at least nice knowing who these members of NEW MUTANTS are, what their powers are, and how the film might draw from their comic book versions.