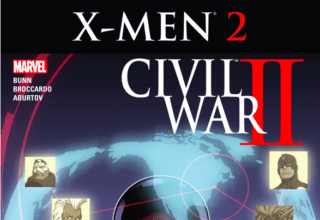 The X-MEN tie-in to CIVIL WAR II from writer Cullen Bunn and artist Andrea Broccardo is a real gem. It’s the rare tie-in that not only feels important in its own right, but also elevates the central conflict of the main series. In some ways, it surpasses the flagship CIVIL WAR title, thanks to its excellent character work and meaningful, organic conflict.

READ: Our review of CIVIL WAR II: X-MEN #1 and freshen up on the series!

The issue picks up in the wake of the conflict between Magneto’s team and Storm’s. Magneto believes they should fear the Inhumans and hold them accountable for this new and awesome power to predict destruction. Storm thinks it should be used to their advantage, but disregards the fact that the Inhuman’s Terrigen Mist Cloud is at the root of all Mutant problems. Lines are being crossed as Nightcrawler sides with Magneto and Psylocke joins Storm’s team. However, both send agents to spy on the Inhumans, resulting in Gambit taking Fantomex captive and bringing him back to Storm’s base.

Cullen Bunn expertly juggles the multiple storylines in this issue. It isn’t the most action-packed, but it provides enough conflict and plot progression to set up some interesting teams for the inevitable conflict. Magneto and Storm represent two sides of an extremely thought-provoking conflict. Should they be concerned with this new Inhuman and what he represents? What if the Inhumans unjustly tell the Avengers that Mutants are a threat, and they’re attacked for no reason? All of the characters struggle with this conflict in some way, and seeing them confront their own opinions and fears is as engaging as any fist fight.

LISTEN: To our podcast discussing the original and legendary CIVIL WAR series!

There is a fist fight in this issue, though, and it’s incredibly entertaining. Gambit and Fantomex are two of the slyest Mutants around, and seeing them face off against each other is a welcome addition to an already entertaining issue. Thanks to Bunn’s firm grasp on the characters, there’s more to it than just the punches. They challenge each other and question why they’re in this position, as they’re each essentially pawns in a bigger game of chess between the two X-teams.

Broccardo’s artwork isn’t perfect, but it does a fine job with its characters. Their faces may look distorted and disproportionate at times, but they show enough expression to elevate the dialogue. It’s hard to make a scene stand out in such a jam-packed and fast-paced issue, but there is a lot to enjoy. The colors are bright and the environments all feel different, which helps with a story that sprawls across several locations. It’s not the best artwork Marvel’s X-line has to offer, but its certainly not the worst.

CIVIL WAR II: X-MEN provides its own conflict outside of the flagship’s disappointing argument. Whereas Tony Stark and Captain Marvel bicker back and forth, the X-Men fear for their own people’s future at the hands of potential Inhuman manipulation. It hits all the character beats, never feels overcrowded, and looks pretty enough to keep on entertaining. Tie-ins rarely get as good as this.