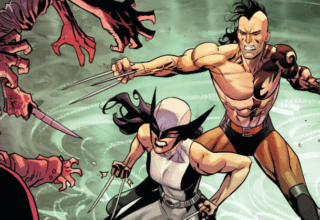 The Mark of X

ALL-NEW WOLVERINE #30 begins with Laura and Gabby rallying the troops (Logan, Daken, Sabretooth, and Deathstrike) from the morgue after being shot by Murumasa bullets. Laura wants to reach out to the Orphans of X, and writer Tom Taylor shows just what makes Laura unique in this scene. Laura’s guilt over her past is strong, but it’s given her a sense of empathy. It’s an important touch that distinguishes Laura from her predecessors and why she works so well directing this small ‘family’. Laura wants to make amends and has just enough control to do so — a rare thing for Wolverine.

That level of control lets Laura and crew move stealthily through the Orphans’ headquarters. Their powers allow them to scope the upstairs rooms with ease in a scene highlighted by artists Juann Cabal and Nolan Woodward. This scene has all the tension and dark colors you’d expect in a spy film, with the ‘scents’ coming over the top in night-vision like colors. It ramps up the tension beautifully, especially with the ending ‘claw-popping’ to remind us just what Wolverine and Co. are capable of.

The Importance of Balance

We see everyone pop out of the ground and attack the Orphans upstairs. There’s no lethal force used though, and there’s even a moment of levity. Laura uses her new magic shield in a way that Gabby can’t help but comment on. Taylor manages to use this scene without it feeling out of place, and the artists follow him right along. Gabby shines here, showing how important her character is to provide some balance to the serious tone of the story.

We dive back in as Laura finds she has a connection to Orphans — Henry Sutter. Sutter was a young boy she refused to kill while in the Weapon X program; the event began Laura’s progress into the hero she’s become. Laura decides to deal with the problem alone, and ventures into the occupied heart of the complex.

The Orphans of X react to Laura in the expected way — gunfire. Laura, however, responds differently. She drops all defense and relates to the Orphans. Laura relates how her childhood of being abused and forced to kill makes her a victim of Weapon X too. This leads to the most powerful moment of the comic, as Laura singles out Henry Sutter. She attempts to explain to him, but Henry shoots her over and over again, wracked with anger and survivor’s guilt. Laura never drops her stance though. She speaks to Henry calmly as she bleeds, reminding him that Weapon X ruined her and her family too, and they aren’t monsters.

This is the centerpiece of the entire issue. Taylor’s story blends perfectly with the artists’ visuals to get the whole message in a few pages. It changes the Orphans from a terrorist group into what so many angry people are — souls in pain looking for some relief. Sutter brings a shot to your heart even after shooting Laura, because we understand what drives him. We’ve seen it in Laura for years: the desire to just make the pain stop, no matter what. The issue could end here, on that final panel, and it would still say everything it needs to say.

Why X-23’s Story Matters to Survivors

ALL-NEW WOLVERINE #30 stands as a reminder of how we need to understand people around us. However, it also reminds us of how much we need Laura Kinney as Wolverine. She is the only one who could use her own pain to give other broken people a new cause. She’s inspiring and violent because of what she’s been through, but hasn’t lost her edge, either. Marvel needs to keep her around, even if the original Wolverine is back.

Because there are always more Orphans.