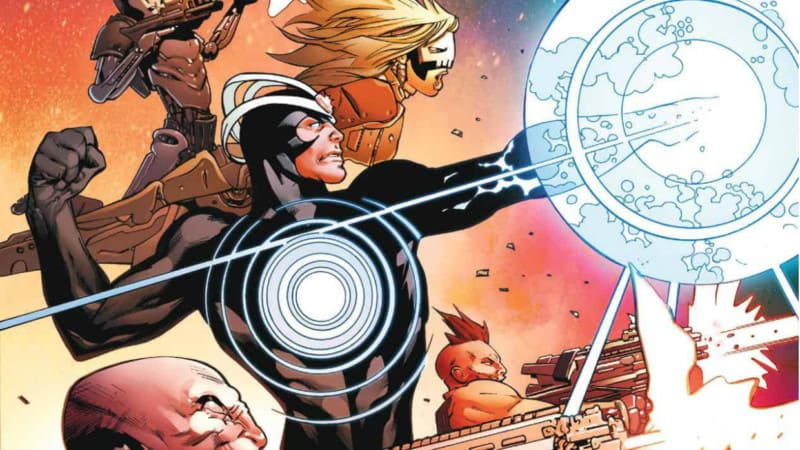 Matthew Rosenberg continues his run on ASTONISHING X-MEN with this action-packed penultimate issue of the series. In ASTONISHING X-MEN #16, Havok joins forces with the Reavers in order to break their leader and the rest of Havok’s ragtag, semi-X-Men team out of Government captivity. The Office of National Emergency (O*N*E) has a few tricks up its sleeves, though, when Havok arrives. Rosenberg writes another hilarious issue of this loose, almost straight-up comedic story arc. He also adds some interesting new ideas to the X-Men mythos, which I hope carry over into his run on UNCANNY X-MEN. Artist Greg Land draws some cool action scenes while colorist Frank D’Armata includes some amazing colors to highlight Dazzler’s powers. Overall, it’s another fun issue of this great series.

A Tenuous Team-Up in ASTONISHING X-MEN #16

In the last issue, O*N*E agents captured much of Havok’s team after they unknowingly battered a bunch of Government agents. They also captured the head of the Reavers, Donald Pierce. In ASTONISHING X-MEN #16, Havok, with no other leads, decides to visit the Reavers’ headquarters in order to strike a deal. He wants to save his friends and they want to save their leader. The Reavers decide to work with Havok, but only if they can poke in his brain to find a nanovirus that Bastion implanted within his brain back when he was inverted. They succeed and find the location of the incarcerated teammates.

Meanwhile, at the facility, O*N*E agents experiment on Colossus and Dazzler. In order to save Dazzler’s life and gain intel on the Mutant hating agency, Beast proposes that he work for O*N*E. They agree, and there he comes into contact with Donald Pierce. 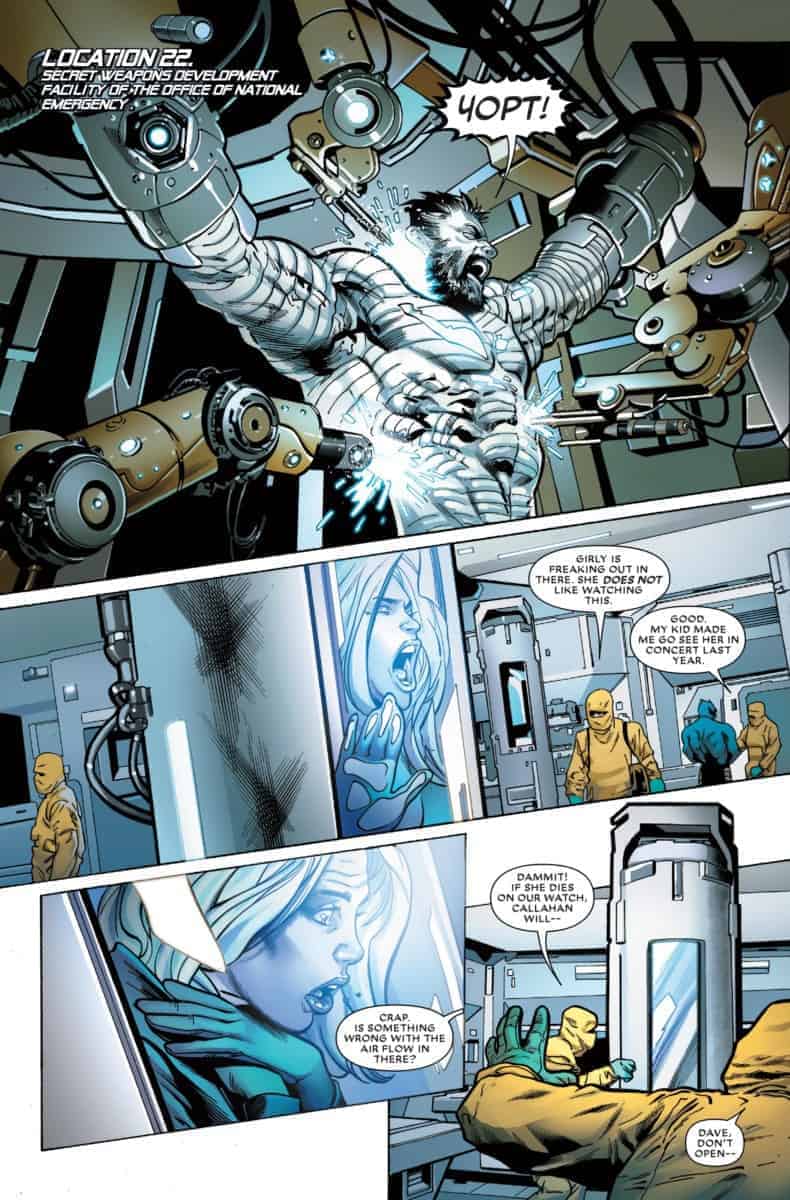 Havok, Warpath, and the Reavers storm the facility and, one by one, save everyone, including Pierce. However, O*N*E is prepared for this contingency. They send out a group of Sentinels to take care of the Mutants. Beast, however, never figured out what O*N*E’s main goal was in capturing the X-Men. What is this plan, and how do the Reavers fit into it? Pick up ASTONISHING X-MEN #16 to find out!

Lots of Levity in ASTONISHING X-MEN #16

Rosenberg makes this series unique compared to the other X-books on the stands right now. That’s thanks to his surprisingly light take on the series. Much like his other books, Rosenberg adds in a lot of comedy to pretty serious plots. ASTONISHING X-MEN #16 is no exception. I’m quite fond of Rosenberg’s characterization of Havok as a kind of goofy, lovable loser. He’s quippy and doesn’t take himself too seriously. It makes him into an endearing character, and it makes him stand out. Not that his prior characterization pre-AXIS was bad, but it feels like a refreshing change. This change could easily have come from a major emotional reversal, which he went through in X-MEN BLUE. It’s much more interesting than a “tortured formerly-evil character atoning for his past sins” story would have been.

The lighter tone also makes the series feel a bit less heavy than some other comics on the stands. How that resonates with you depends on your taste. If you like more serious, plot-heavy books, maybe this isn’t the book for you. For me, it’s nice to have a light, breezy read once in a while. Making it an X-book, which are generally marked by overwrought, soap opera style emotions and twists, adds to my enjoyment. It’s nice to see an X-Men series that doesn’t take itself too seriously. Since there are so many X-books on the stands right now, it helps to make it stand out from the rest.

ASTONISHING X-MEN #16 has some interesting art. Divisive artist Greg Land adds the pencils, which look quite epic when the action starts. Many of the splash pages and Sentinel shots look appropriately dynamic and action-packed. What I really liked about this issue, though, was Frank D’Armata’s colors, especially when showing off Dazzler’s powers. The psychedelic-looking tye-dye rainbow is a great way to illustrate her unique powers. It also looks stunning seeing this burst of color in the backdrop of a cold, silvery steel government base. It’s a very memorable take on Dazzler’s powers, and I really like it. 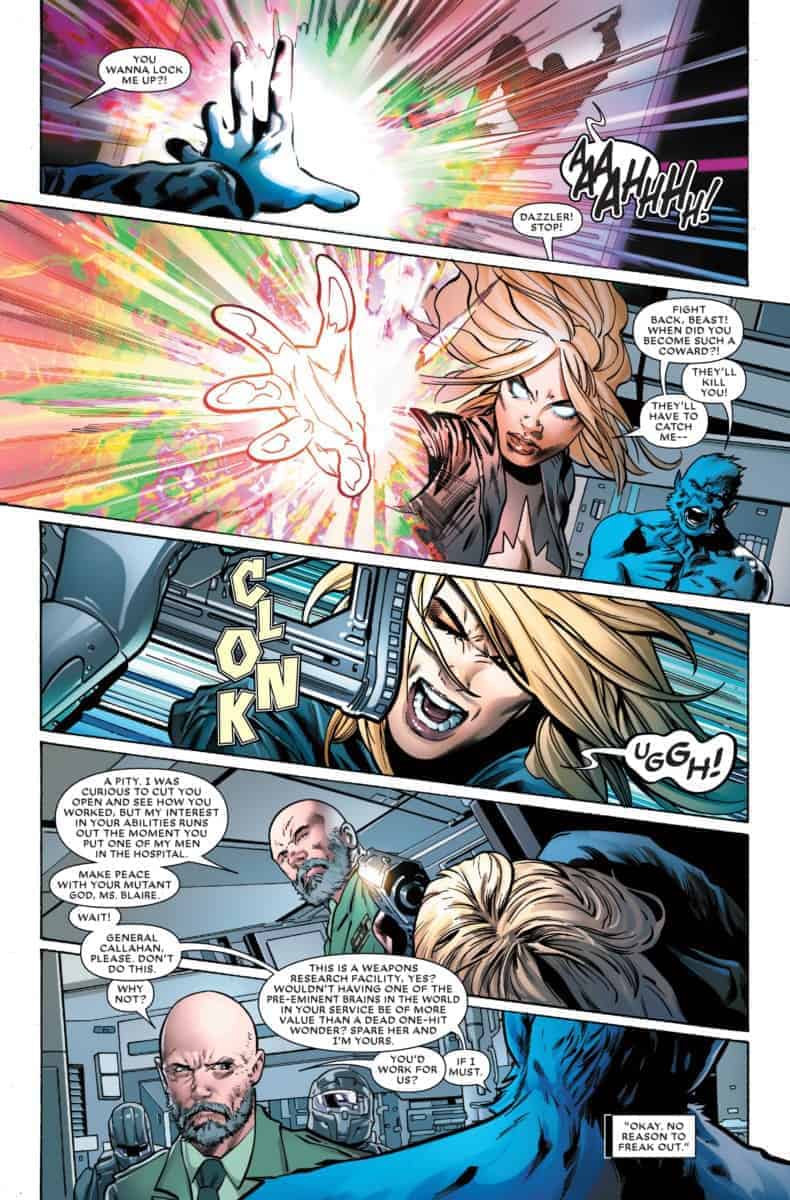 ASTONISHING X-MEN #16 is another hilarious, action-packed addition to an awesome series. I definitely recommend this issue to anyone looking to read a funny book or wanting to jump into an X-Men series.