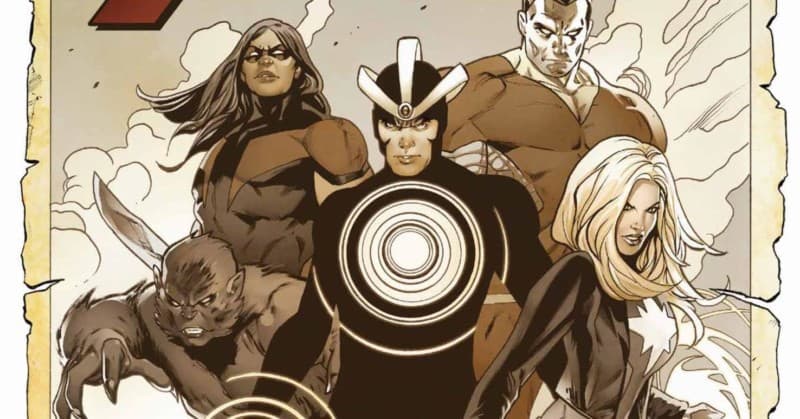 Previously in ASTONISHING X-MEN, exiled former X-Man Havok began assembling his own team of mutants. His quest featured unexpected reunions with a Banshee who didn’t seem much like himself in addition to a Colossus who has developed a serious drinking habit since the events of X-MEN GOLD #30. Now, in ASTONISHING X-MEN #15, Havok’s team has finally been made complete with characters including Beast, Warpath, and Dazzler!

Unfortunately, their time together appears to be coming to an end as new revelations threaten to break the team apart.

Now, it is up to Havok to step up as a leader and save his team from falling apart and succumbing to perilous threats.

The beginning of ASTONISHING X-MEN #15 features Havok’s newly assembled team sort of getting along.

By “getting along” I mean engaging in some serious bickering.

Despite their differences, each member of the team tries to make their dynamic work. Unfortunately, those efforts are fleeting. It is revealed that X-Men leader Kitty Pryde has declared Havok and the rest of the team terrorists since they are no longer considered affiliates of the X-Men. In addition to this, Havok reveals his beliefs that the villainous Bastion has implanted something within him, something that the Reavers and O.N.E. are pursuing.

Thus, Beast comes to the conclusion that Havok assembled the team to find people to protect him. Havok initially confirms this theory, to the distaste of the rest of his teammates. Feeling ashamed, he decides to leave his team behind. Dazzler attempts to give Havok a pep talk by reminding him that he’s still an X-Man, but he remains dejected and pays a visit to a bar.

There, Warpath finds him and inspires him with some words from Scott Summers. Warpath knows that Havok lied about making the team to protect himself. Havok ultimately felt that making those claims would distance himself from the rest of the team and protect them from those coming after him.

Unfortunately, once more, that plan does not work, and Havok’s pursuers ambush the rest of the team.

Meanwhile, Havok and Warpath embark on their own plan to discover the motives behind the Reavers and O.N.E. once and for all by asking to join the Reavers themselves.

Ultimately, ASTONISHING X-MEN #15 is not as dynamic as its predecessor. However, writer Matthew Rosenberg excels in his characterization of Havok. He is definitely in the midst of a crossroads and ultimately feels as though every move he makes will hurt someone he cares about.

Thus, there is an interesting tension within this issue’s narrative that navigates Havok’s decision-making. He is unsure of himself, and we are unsure of his motives behind each and every choice he makes. This catalyzes an interesting pace within an issue that moves slower than its predecessor.

So, overall, ASTONISHING X-MEN #15 is a solid work in Rosenberg’s run that sets the pieces up for a wild arc.

The Many Hues of ASTONISHING X-MEN #15

The artwork from pencillers Greg Land and Neil Edwards and inker Jay Leisten is far from perfect. However, they do present some gorgeous images throughout ASTONISHING X-MEN #15. The sequence depicting Havok walking away from Dazzler is particularly poignant. In conjunction with colorist Frank D’Armata, the artists truly establish Havok’s isolation and hopelessness. D’Armata employs colorless tones that render Havok’s world as drab, encased in loneliness.

An X-Men Reunion in EXTERMINATION #2

I also enjoy the work on the final pages that depict Havok executing his plan to join the Reavers. It is a cinematic sequence that picks up the pace of a slower issue. As a result, we better engage with Havok’s journey, one that may or may not be coming together.

These specific moments stand out in ASTONISHING X-MEN #15. However, for the most part, the artwork is rough around the edges. The action sequences come across as a tad chaotic, making the panels feel muddy.

So, if it weren’t for those moments in addition to moments of inconsistency, the artwork would have come together nicely.

ASTONISHING X-MEN #15 primarily strives to set the stage for what’s to come. Havok’s team has been divided and conquered. Now, it is up to him to work alongside someone he’s had differences with and overcome his personal shortcomings in an effort to save his team and stop those coming after him.

Thus far, Havok has proven to be an unpredictable leader. Despite that though, it has been entertaining to see him grow into that role despite his mistakes.

Now, the question is, will Havok save his team before time runs out?

We’ll just have to stay tuned.