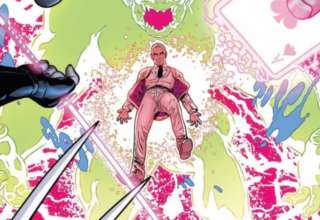 ASTONISHING X-MEN #10 is perhaps one of the most psychedelic comic books I’ve ever read. ACO and Rachelle Rosenberg’s artwork not only sends the reader’s mind on a trip, but it’s clearly the strongest aspect of this comic book. Charles Soule’s wild series has been entertaining, relying on plot twists and suspenseful action scenes. I’m now curious how he’ll keep his characters fresh with growth. How will he wrap up the series and what will become of our heroes? With three issues to go, ASTONISHING X-MEN #10 leaves the reader curious.

The Action is Truly Something Else

As the X-Men are headed to Scotland, a level of dread begins to descend upon them. Even the non-psychics can feel it in their heads. As they get closer and closer to Fetters Hill, the feeling gets worse and worse. Oh, and what else? There are literal dragons floating above the small village. Gambit makes a bit of a joke here and then utter chaos ensues. Arrows from below attack the Blackbird and force Rogue to make a crash landing.

The artwork here is absolutely stellar. The way ACO lays out the pages is unlike any X-book we’ve seen in a long time. There are a good amount of splash pages and enough panels to keep your eyes wandering for minutes. I dig this dynamic a lot because there are just so many characters that need to be shown. This is one of Charles Soule’s strengths: he wastes no character. Every X-Men on his roster is here for a reason, and ACO’s fantastic choice of panel alignment assists Soule’s writing tremendously.

Once the X-Men land, Proteus’ ground monsters are there to attack. Psylocke strategizes that for each monster they take out, Proteus will become weaker and weaker. This begins to work until Proteus finally decides to strike: he opens up the ground beneath the X-Men and attacks them with what appear to be sand monsters. Yes, sand monsters. I mentioned this book is trippy, right?

Can X be Trusted?

The overarching theme of Act II has been trust. Is this X character really Charles Xavier? He’s tremendously aggressive, suggesting he’d nuke this small Scottish town if they had the option. And when Proteus asks if X still believes in his dreams of human and mutant coexistence, X stammers. This doesn’t seem like Charles Xavier, even the shady iteration of the 2000s.

And that leaves us with Proteus. He claims to be making a sort of Garden of Eden. His plan is to give people whatever they want. His reasoning? If the majority of people are good, shouldn’t the end result be good? Clearly there are faults in this argument, but it makes X stutter with frustration and the issue soon ends in a major explosion.

“I refuse to submit to the tyranny of reality,” Proteus states. ACO and Rachelle Rosenberg take these words literally as they create the artwork for this comic book. While ACO’s panels and drawings are creative, Rosenberg’s coloring can probably be found on a 70’s concert poster. The hues of green she chooses are mellow and dream-like, while the reds and oranges she applies make it clear that reality is not in the picture.

What Will the Results be?

ASTONISHING X-MEN #10 is another fine issue. My only worry is that so much is happening in this comic that doesn’t really align with contemporary continuity. And this makes me think: are these characters still in the Astral Plane? Did they never come out? Is it possible this is a different reality? Or is Soule simply saying, “screw it, we’ll figure it out later”? This is a unique X-Men book, and while characterization is spot on, this plot is seriously out there. And this is a good thing.