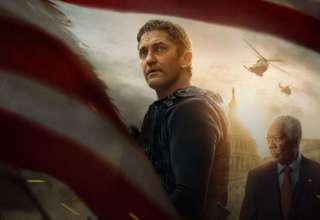 The …HAS FALLEN series, of which ANGEL HAS FALLEN is but the latest, admittedly, baffles me. I cannot, for the life of me, see what anyone saw in OLYMPUS HAS FALLEN or LONDON HAS FALLEN. Neither were insulting, certainly, but neither of them were particularly good either. And yet, here we are with installment the third.

Does ANGEL HAS FALLEN live down to expectations or blaze its own trail? Will this chapter allow Gerard Butler to show any of his charisma or do they not want to mess with their formula? Hop on Marine One and let’s take a look.

The Idea Behind ANGEL HAS FALLEN

President Allan Trumbull (Morgan Freeman) is tired of the way we fight war in America. He thinks it has become too easy to do it and that the use of contractors — ala Blackwater — that must end post-haste. Agent Mike Banning (Gerard Butler) does not seem to feel much one way or another about it, but his friend Wade Jennings (Danny Huston) has seen his business take a hit as a result. With Banning seemingly a shoo-in for head of the Secret Service though, taking over for the retiring Gentry (Lance Reddick), Jennings seems to be on the edge of a new start, moving from far to hire to agent trainer extraordinaire.

Banning’s wife Leah (Piper Perabo) also cannot wait for her husband to get tapped for the position. When he does, she seems convinced, he will finally have more time for her and their baby girl. Mike, for his part, should want the job too considering he is running on zero sleep and a plethora of pain killers stemming from his repeated head traumas on the job.

Everyone’s plans go up in a flock of drones, however. Banning is the only Secret Service officer of a 17 agent team that survives the encounter and ends up blamed for masterminding the attack. There goes that job offer. Moreover, the President ends up in a coma leaving Vice President Kirby (Tim Blake Nelson) to decide if America should act on intelligence that seems to imply Russia paid Banning to engineer the President’s assassination.

Far and away the most interesting thing going on in the ANGEL script is how much is going on. We have just out of the news contemplations of CTE, pain killer abuse, Blackwater-like groups, the endless war of the post-9/11 era, and Russian interference. It is also worth noting how unevenly the topics are engaged.

CTE and pain killer abuse loom large in Mike’s story until they don’t. That switch thankfully happens in time for a “seeking outside help for your mental health is dumb” joke. Even better? That’s the moment the movie chooses to close on.

The movie says directly that Russia interfered in American elections but they turn out to be framed for the President Trumbull attack. The movie rejects the notion that the government is bad but also glorifies the idea of the one man outside the law hero.

Militia members are depicted as well-armed but untrained and largely lacking the willpower to really engage in the conflicts they claim to be preparing for. On the other hand, guns are the only way, excepting the occasional bomb, to solve any problems in this movie.  In other words, the script has lots of ideas and no idea what to say about any of them.

The dialogue is achingly average. Don’t go into the theatres hoping for word based fireworks.

Casting the Leads of ANGEL HAS FALLEN

Gerard Butler is capable of being funny. He is frequently charismatic in interviews and some roles. He can act and has demonstrated this on occasion. It is not particularly relevant to this film, but he also has a pretty strong singing voice. He is a man of gifts, is what I’m saying.

However, as of late, especially in this series of films, you rarely see those interesting facets of him. So many films seems content to reduce him to gritted teeth, portentous mumbling, and “men of will” stares. In this way, ANGEL is no different.

Casting the Rest of the Callsheet

Nick Nolte is arguably the single standout in the cast. Growling lines that simultaneously play as serious and joking, he presents the tone the movie should reach for more often. Moreover, the few moments of sentimentality that come through do so on the strength of Nolte’s whisper and his wet eyes.

Jada Pinkett Smith shows early promise, but the film never makes enough room for her to really become the Tommy Lee Jones in THE FUGITIVE they obviously want her to be. And then, no spoilers, how her storyline ends is a failure of imagination that leaves a bad taste.

Morgan Freeman has two to three short speeches he nails. Otherwise, he is either literally comatose or just existing on camera. There are stretches it feels as though they entirely forgot to script lines for him.

Ric Roman Waugh cut his teeth in Hollywood predominantly as the brain behind stunts. The fact that ANGEL is loud, ugly, and largely lacking in an interesting action sequence makes this fact fascinating. He did the stunts in movies like THE CROW, TRUE ROMANCE, and HARD TARGET. Where is those films’ zeal and creativity for the controlled chaos of good action scenes? I know not. Certainly not in ANGEL HAS FALLEN.

ANGEL HAS FALLEN is the very definition of assembly line mediocrity. Grasps for relevance notwithstanding, ANGEL is the kind of movie that could be released anytime between the 80s through the naughty augties. Not only that, it could do so with almost zero changes and feel just as average there too.

This version of the franchise may be over, but how can our favorite superhero team make a …