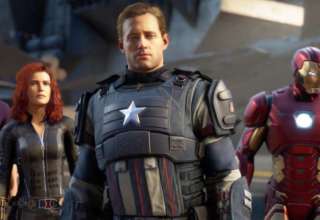 Square Enix’s MARVEL’s AVENGERS couldn’t be more perfectly timed with the melancholic emotions of AVENGERS: ENDGAME still in our brains. Additionally, based on its original trailer, a LOT of cues were taken from the MCU to make this game feel in touch with the current Marvel status quo. After all, the main trailer team consisted of Iron Man, Captain America, Black Widow, Bruce Banner/Hulk and Thor. Still no love for Hawkeye sadly…

Now, as of Tuesday, we can finally see the gameplay footage, not just squint hard at the blurry E3 2019 leaks. They clips reveal a basic premise, a few hints at the game’s inciting incident, some potential cameos, and pre-rendered goon bashing. What more could a comic book fan want?

Naturally, it’s fair to be skeptical that this won’t look or play like the final cut. Any good comic fan, however, loves to theorize and observe plot details from what limited material they have at hand. An 18-minute gameplay demo like this is basically begging for the speculative treatment.

The opening demo is both a tutorial and prologue to the main story campaign. It sees the Avengers gathered in San Francisco for a celebration only for the Golden Gate bridge to come under attack. With the bridge collapsing and a S.H.I.E.L.D. helicarrier under siege, the Avengers jump onto the offensive. However, the attack is revealed to be a decoy, one which blindsides the Avengers to a series of explosions that decimate the helicarrier, half of San Francisco and, most consequentially, Captain America. This event, dubbed ‘A-Day’ by the public, cause the remaining team to disband for five years until a new threat emerges.

On a less dour note, the actual gameplay segments offer real-time walkthroughs of how each character controls. Thor plays like a heavy brawler similar to 2018’s GOD OF WAR, and not just because of how Mjolnir functions and this scene. Captain America has something of an Arkham combat style mixed with projective shield throwing. Widow uses a variety of gadgets, guns and CQC attacks. Iron Man relies on long-distance repulsor rays and missiles to blast foes while Hulk can leap tall gaps and smash everything, even using goons as bludgeons Loki-style.

There’s definitely a stiffness to the character movements, but overall this gameplay looks promising. It offers a bit of variety to each playable sequence that never makes you think the developers copy-pasted move sets. Visually it’s quite stunning, and you can tell Square Enix did post-production to the facial features so the game models don’t look like MCU stunt doubles. How smoothly other characters will control in the final game remains to be seen.

Ms. Marvel in the Crowd

One big question people had about the original E3 trailer was the identity of its voiceover narrator. Our hints: she’s a woman, witnessed A-Day happen and clearly a huge Avengers fan. A handful of names circulated this individual, most notably fan favorite Kamala Khan, aka Ms. Marvel.

The gameplay demo more or less confirms it’s Kamala. During the hellicarrier fight, you can see S.H.I.E.L.D. experimenting on what appears to a Terrigen Crystal, the source of awakening Inhuman genes. Kamala, as Marvel fans know, is an Inhuman with  polymorphic abilities formed from her exposure to Terrigen Mist. And, during one cutscene, we see a girl in a Captain Marvel shirt calling for her Abu (a name Kamala gives her dad) before collapsing over a grate leaking mist.

How much of a role Kamala has in the game beyond Easter Egg status is currently undetermined. The main plot takes place five years after A-Day so, theoretically, she would have mastered her Inhuman powers by then. Plus, stories like this tend to follow a disillusioned team raising a new generation to succeed where they failed. If we get a Ms. Marvel or even Captain Marvel appearance thrown into the mix, even better.

Back in MARVEL’S SPIDER-MAN, Spidey references the Avengers’ whereabout while swinging by Avengers Tower. He jokes that they’re rarely in Manhattan anymore and “are somewhere on the West Coast right now.” Given how this prologue game takes place in San Francisco… you draw the connections.

Just as the Marvel Cinematic Universe made us embrace interconnected cinematic universes, gaming culture might be doing the same. Granted, SPIDER-MAN was developed by Insomniac and not Square Enix. But the little details emphasizing a shared game universe of superheroes remains intriguing. It also helps that one of SPIDER-MAN’s side villains — Taskmaster — is in the game demo as a boss battle for Black Widow.

These games are clearly playing with familiarity. Save for Thor’s design, most of the Avengers resemble their MCU counterparts, right down to Bruce Banner’s clothes. Even the voice cast, which includes Troy Baker, Nolan North, Jeff Schine, Laura Bailey and Travis Willingham, reinforces the similarities. Willingham and Bailey are, after all, reprising their roles as Thor and Widow from the current animated shows.

It’s likely the game will expand upon this character roster. The developers have already teased some stuff about Hawkeye. But whether we’ll see interactions with the New York setting of SPIDER-MAN, or at least a reference to Yuri Lowenthal’s version of the character, is debatable. Still, a guy can speculate.

Now that MARVEL’S AVENGERS’ gameplay is visible, it’s possible for fans to develop some good will. Games like these as tend to build an insane level of hype, especially given the acclaim its film counterpart received. We want it to contain enough of what made the MCU a cultural juggernaut, but also do its own thing with the source material.

But, from a standard gameplay experience, it certainly looks functional if not conventional. Diverse roster of character abilities, flashy set pieces, high quality graphics- quintessential AAA experience. And it definitely puts the “cinematic” in this franchise’s movie-like appeal. Most of all, it updates gaming culture’s ability to play as the Avengers outside of ULTIMATE ALLIANCE, Lego licensed games or fighting games. Whether it successfully incorporates the comic lore into this new Marvel world remains to be seen.

Here’s hoping that 2020 delivers the Avengers gameplay experience that Marvel fans and video gamers deserve. The fact that we could potentially play as Ms. Marvel makes the anticipation even greater.

After LOGAN, there has been hesitancy over what would happen to the X-Men franchise. Fox's…