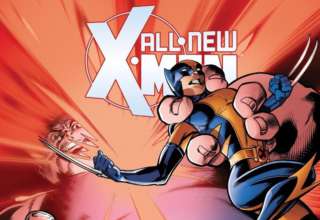 The first four issues of Dennis Hopeless and Mark Bagley’s ALL-NEW X-MEN have been a fun, light-hearted ride spotlighting and characterizing some of the team’s adolescent heroes while disregarding the rest of the cast. Although they have many strengths when it comes to art and characterization, there are many weaknesses when it comes to the plot. And while ALL-NEW X-MEN #5 manages to improve on some of the book’s weak points, it still comes along flawed and as one of the weaker works of Dennis Hopeless…

READ: Need to catch up? Check out our review of ALL-NEW X-MEN #4!

The issue opens exactly where #4 took off: with the Blob having defeated the All-New Wolverine in a Paris restaurant and her boyfriend Angel standing next to them utterly shocked. It’s remarkable how Hopeless will set his characters up against a classic X-Men villain, having the conflict take almost three entire issues–without even the slightest bit of purpose or sympathizable motivation. As I’ve pointed out in my previous review, the conflict comes about because the Blob is annoyed and hungry, and that’s about it. While in ALL-NEW X-MEN #4 it served the purpose of pointing out Laura’s vulnerability, this is a point that has been made now, and thus, the issue’s plot becomes ultimately pointless. As a reader, I feel extremely indifferent about everything that’s going on. This is a shame, since Hopeless has done a much better job at creating a story with character dynamics,  as well as interweaving an exciting plot with villains with redeeming qualities, on X-titles like CABLE AND X-FORCE, X-MEN: SEASON ONE, HOUSE OF M or, for that matter, the first story arc of ALL-NEW.

That being said, the strength of ALL-NEW X-MEN #5 is that it finally puts characters like Idie, Evan and Bobby into the spotlight more, giving them cute little character moments. After a failed attempt at flirting with a cashier, Bobby has to be encouraged by Evan not to be afraid of his friend’s reactions. As Hopeless explores Evan’s backstory to explain his confident attitude and why he would think that Bobby has no reason to fear rejection from his friends, it’s the first time in this book that we actually get a sense of what’s going on deep inside the character. Although, given their dialogue in UNCANNY X-MEN #600, I would have expected young Bobby to deal with his sexuality more openly than his older self (currently starring in EXTRAORDINARY X-MEN, check out our latest review!) does. The way he feels and the distance that’s being created between him and his best friend Hank is believable and in-character. Iceman is always at his most interesting when writers explore his personal insecurities, and Hopeless does that in a superb way.

READ: This is why Iceman’s homosexuality makes perfect sense!

Mark Bagley’s art is perfect not only for this kind of heartfelt, teenage dialogue but also for the really cartoonish action sequences. It helps the book a lot and really explores these characters. What he delivers here is his artistic peak, and fans of his ULTIMATE SPIDER-MAN material won’t be disappointed (at least not by this issue).

Meanwhile, Idie pays a visit to the Notre Dame church, expressing her anger at God. While this might be a successful attempt at giving more depth to the character and implementing the criticism of religions as a darker theme in this, overall, light-hearted story (God’s mercy, according to countless theists, shouldn’t apply to those who are different, so Hopeless’ real-life analogy is working out pretty great), the scene kind of comes out of nowhere and feels really out of place.

CLICK: Criticism of religion in X-Men comics? This is why you should read X-MEN: GOD LOVED, MAN KILLS!

All in all, I’m on the fence about ALL-NEW X-MEN #5. On the one hand, we have flawed characters, teenage drama, real-life analogies and a fun, adventurous vibe–everything that makes the X-Men fascinating. On the other hand, we have Cyclops’s soccer ball accidentally falling down and causing him to be beat up by the Blob for no particular reason other than the fact that he was annoyed. While Hopeless does many things right, the way he handles his antagonist is not one of them–and makes this otherwise strong title seem ultimately pointless.