Put Jean Grey and Emma Frost in a room together, and you can guarantee fireworks!  But what do you get when Emma Frost is Jean Grey‘s teacher?

The release of this week’s issue of All-New X-Men was not only extremely confusing because #37 was actually released after #38 (the Ultimate storyline overran, and #38 tied in to Black Vortex), this issue’s cover is also extremely misleading. On the cover, we can see Iceman and Beast, but they don’t even appear in the book. They’re not even mentioned. This issue is actually all about the relationship between Jean and Emma.

The All-New X-Men, the original X-Men who had been brought into the present after the death of Charles Xavier and the beginning of Cyclops’ mutant revolution, have returned from their adventure in the Ultimate Universe. In this issue, we see Emma in her role as Jean’s teacher as they both take a trip to Madripoor. Emma takes Jean’s psychic powers from her for her mission, which is finding the Blob and fighting him in order to prevent him from selling MGH. In this fight, Jean has to learn to rely only on her telekinetic abilities. We also find out that Emma apparently has been able to regain most of her psychic abilities with a little help of the Stepfords.

As already mentioned above, the centerpiece of this issue is the relationship between Jean and Emma. In the last two years, this relationship has been one of the most important and interesting aspects of Bendis’ run. We have the older, nearly depowered, extremely jealous ex-girlfriend of Cyclops who has to teach the 16-years old version of Cyclops’ first true love and deceased wife how to cope with her newly discovered powers. The interesting thing about the relationship was that it changed all the time. In the beginning, Emma was jealous of Jean, which also had something to do with her breakup with Scott after they both became hosts of the Phoenix. Jean was not very happy about being taught by Emma, and Emma tried to provoke Jean by telepathically showing her pictures of her relationship with Scott. But, after they had a long and, supposedly, very strange telepathic conversation, they suddenly became friends.

In this issue, we find a very insecure Jean. The reader is able to understand exactly why Jean feels the way she feels about all the new abilities and why she is afraid of not being able to control them. Emma is trying to make her feel more self-confident. We can really see the way Emma loves to teach in this issue, it’s kind of similar to the way she treated Benjamin in Uncanny X-Men #14: she drops her students into a dangerous situation instead of letting them train within the safety of the danger room in order to prepare them for an emergency and to strengthen their confidence. This makes the relationship between the women remain complicated. Emma, in her role as a teacher, has to remain dominant and still acts kind of saucy, which, even though their relationship has improved, makes this trip rather exhausting for Jean. 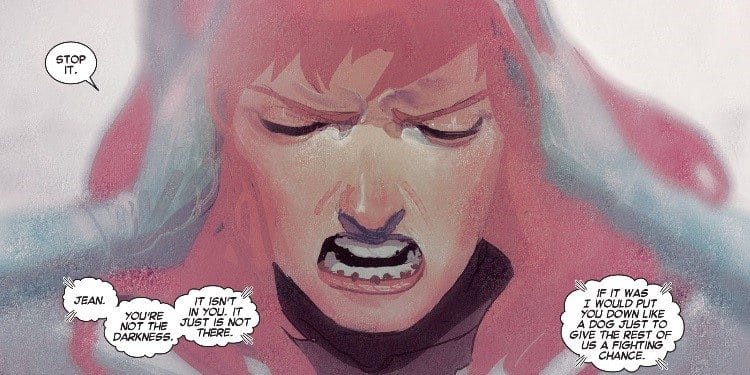 It can generally be said that any fan of Emma Frost should really read this issue. Everything you could possibly love about the character is portrayed: the way she teaches, the way she interacts with other characters in a very sarcastic and saucy way, but also the fact that she can be a very inspiring person. The way she gives Jean strength is extremely touching, and the reader understands why these two characters are extremely important for each other. Emma really makes Jean understand that she IS able to control her powers, and that they won’t let something similar to the Phoenix happen again.

When it comes to the art, this is not necessarily my favorite issue. It’s not bad, you can really tell that there has been a lot of effort going into it. But then again, I found it to be too cartoon-ish. Some facial expressions were really hard to tell, which is problematic in an issue that is especially about the characters and their relationship. And some of the mutants on Madripoor could not really be identified as humanoid, instead they looked like angry sloths for some reason. But the art is definitely not a deal breaker. In the end, it’s a matter of taste.