Artistically, the issue struggles to keep up with Williams’ stellar writing, but, thankfully, artists Georges Jeanty and Jim Charalampidis don’t inhibit AGE OF X-MAN: X-TREMISTS #2 from being a strong issue. The way Williams effortlessly blends storylines and successfully characterizes the cast is worth a read, regardless of whether or not you prefer the artistic style. 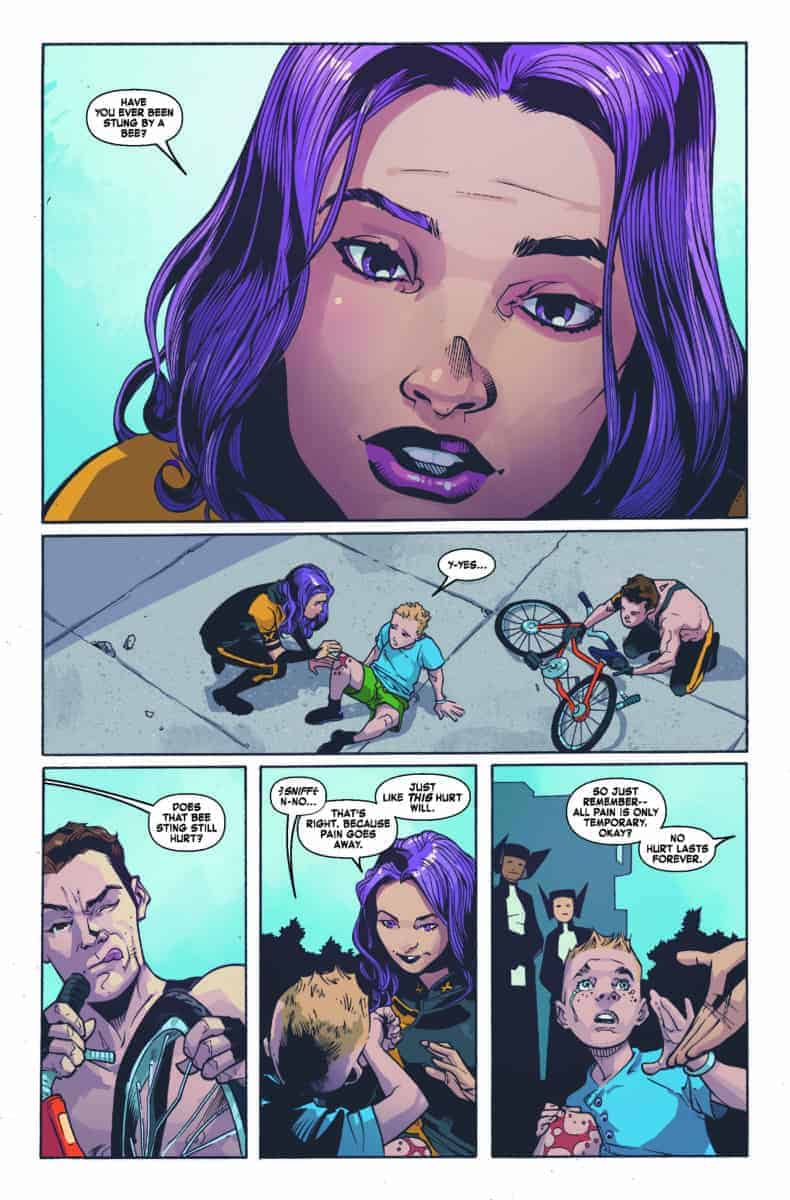 There are two main narratives in AGE OF X-MAN: X-TREMISTS #2: Fred’s illicit feelings for Betsy and Jubilee and Moneta’s problematic encounter with their unwilling “guest.”

During a “controlled purge” Betsy notices that Fred is romantically attracted to her. In typical Betsy fashion, she directly confronts her teammate and offers a quick mind sweep that would permanently erase his feelings for her. Fred dodges the conversation and stops showing up for work. Betsy confronts him again, this time at his home. There, she seems to come to the realization that she too might have feelings.

On the more business side of things, Moneta flips out on Department X’s “guest” (i.e. prisoner) that the team kidnapped in AGE OF X-MAN: X-TREMISTS #1. That alone wasn’t all that exciting, but the scene does become a bit more interesting when the prisoner becomes offended by Jubilee’s so-called sympathy. She smartly accuses Jubilee’s passivity of being worse than Moneta’s brutality. The prisoner’s monologue is relevant, poignant, and unlike anything else we’ve seen in the Age of X-Man thus far.

As an English major, I enjoy a good metaphor. They get a bad rap, but a well-built metaphor can add a lot to a poem, novel, or comic book. Williams gives this issue another level of meaning through Fred’s moth metaphor, located near the end of the issue. Many writers have explored moths as a metaphor for fatal attraction, but I think Williams takes it a step further through Fred’s commentary. 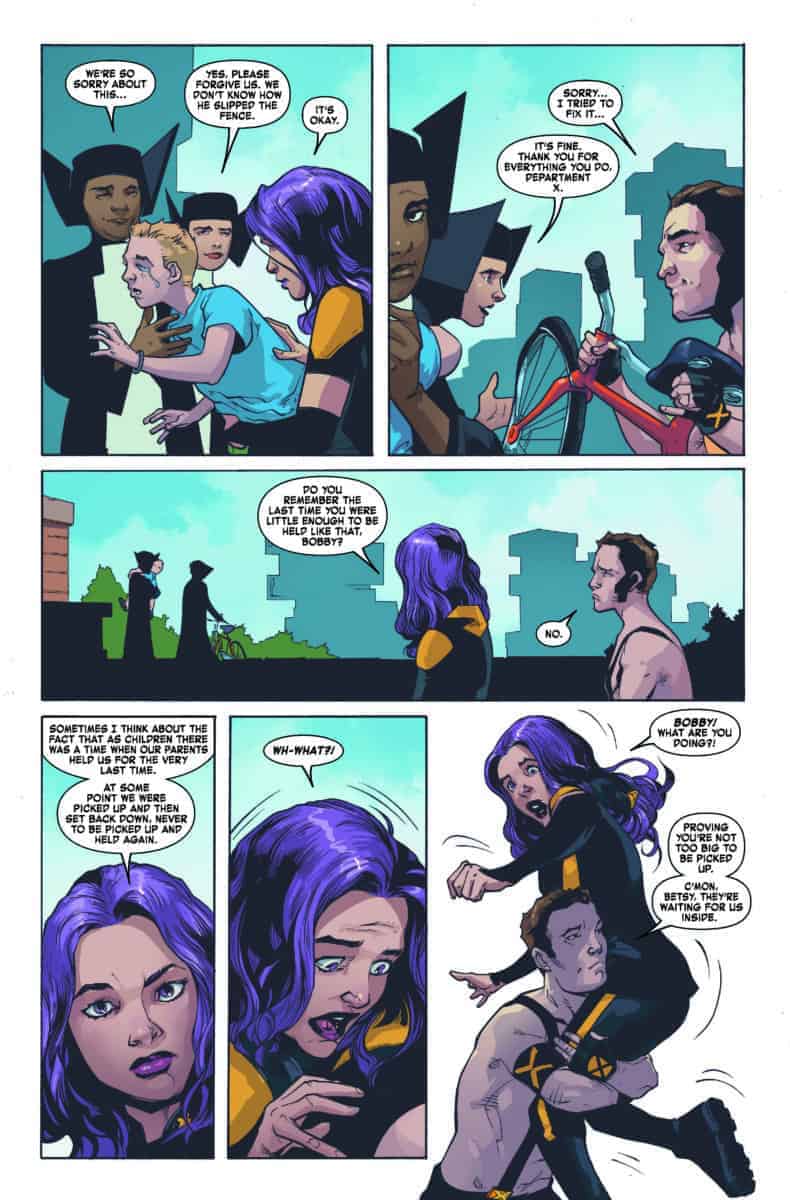 Yes, Fred thinks of himself as a moth that’s attracted to Betsy, who’s an unachievable target, similar to a light. The metaphor takes on another layer of complexity when Fred begins talking about wanting to keep his attraction to Betsy because at least that sense of longing allows him to feel something.

A moth’s obsession with moonlight might seem obtuse until you consider the fact that moths truly only want one thing. Reaching for moonlight is their only purpose. Without love, Fred understandably feels like his life is empty, but like a moth, he’s willing to continue reaching. Of course, at the end of the issue, we find out he might not have to keep reaching…

In my review of AGE OF X-MAN: X-TREMISTS #1, I gave the issue a low score. This was partly because there was too strong a focus on Iceman. I love Iceman as much as the next X-Men fan, but I didn’t feel like the other characters got the attention they deserved. She seems to have heard my plea because In AGE OF X-MAN: X-TREMISTS #2, Williams really focuses on characterization. Almost every character gets a solid moment (or two) of character development, though Psylocke and Fred get the most.

Williams noted on her Twitter that this is Psylocke’s issue, so the strong focus on the purple-haired telepath makes sense. What impressed me the most with Psylocke is how Williams gets inside her head without including an internal monologue. We see who Betsy is through her words and actions only.

Using only those tools, Williams tells us so much about Betsy’s understanding of love and her relationship with grief. The normally rather stoic character finds herself at an emotional crossroads. Blob’s confession and her own moral compass begin to crack her harsh exterior. Perhaps the most powerful moment is Betsy’s speech about not remembering the last time someone picked her up. That reoccurring monologue felt like the beginning of the end for her career at Department X.

Unfortunately, the lines and colors in AGE OF X-MAN: X-TREMISTS #2 inhibit this issue from being absolutely perfect. It’s still good, and certainly worth a buy if you’re considering it. However, the art just isn’t quite worthy of a perfect score. The reality is, Jeanty has a fun, animated style that doesn’t lend itself to a series as serious as AGE OF X-MAN: X-TREMISTS. The series needs a colorist with a darker palette and a penciller who’s willing to move out of the realm of cartoons.

From a technical standpoint, I found myself distracted by how much characters’ faces changed from panel to panel. I’m not talking about facial expressions (which Jeanty also struggles with) but recognizable traits. Psylocke appears many times throughout the issue, but, aside from her hair, there’s no way to recognize her. She looks different (and sometimes slightly distorted) in every panel.

AGE OF X-MAN: X-TREMISTS #2 Got Me Thinking

It’s easy to see why AGE OF X-MAN: X-TREMISTS #2 succeeds as a comic. Williams knows what she’s doing, and she believes in the importance of the story she’s telling. From the political nuance in the prisoner’s dialogue to Psylocke and Blob’s moving exchange, Williams proves that she is willing to pay attention to each and every detail in an issue. As a reviewer, and as a reader, I appreciate that.