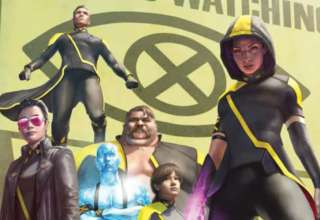 How does a world without love function? From what we’ve seen in the past Age of X-Man installments, the answer seems simple: easily. Everyone lives in this idealistic paradise where starvation, war, and families are things of the past. Well, at least, most people live in that wonderland. Fleeting glimpses into the true nature of the Age of X-Man society in AGE OF X-MAN AMAZING NIGHTCRAWLER #1 and AGE OF X-MAN ALPHA #1 expose a more ominous side. In AGE OF X-MAN: X-TREMISTS #1, that darker side comes into full view…sort of.

X-Men writer Leah Williams spins an intriguing tale around the “X-Tremists” — the Age of X-Man equivalent to police. Regrettably, the strongest part of this issue is its general premise. The art, by Jim Charalampidis and Georges Jeanty, is good but strangely whimsical and bright for a story about police brutality. Williams brings together an excellent cast of characters but does a poor job giving them equal attention. The topic of a police state is easy for modern readers to attach their own thoughts and feelings to, but is the AGE OF X-MAN: X-TREMISTS #1 creative team able to push it a step further?

AGE OF X-MAN: X-TREMISTS #1 is your typical day-in-the-life. Of course, the average day for an X-Tremist is far from typical. Blob and his team infiltrate a “Grades” hideout, where a couple had been living together. Apparently, the X-Tremists had warned them twice before to stop their illicit relationship, but they refused. In the Age of X-Man, the third time is the last time.

The team seizes both the man and the woman after a reasonably prompt fight. All seems normal until the woman suddenly blurts out something very unexpected: she’s pregnant. The team is bewildered and disgusted. A few of them even find it hard to believe, since natural births aren’t just outlawed — they’re nonexistent. It just doesn’t happen.

One of the more successful aspects of AGE OF X-MAN: X-TREMISTS #1 is the way Williams is able to use humor to make the storyline graver. Iceman’s constant barrage of lackluster jokes isn’t meant to be funny. They’re meant to make the reader feel uneasy. All the humor (and there’s a fair amount of it) puts a strange, uncomfortable filter over the entire issue. Here are the X-Tremists, ruining people’s lives, and they’re making silly jokes. It feels wrong, and the fact that characters like Northstar and Jubilee are starting to realize that it’s wrong is exciting.

Williams primarily uses Iceman to provide the humor, which was a valid choice. Iceman has always used jokes to hide his true feelings; AGE OF X-MAN: X-TREMISTS #1 isn’t an exception. His humor stands in clear opposition to Northstar and Jubilee, who appear sullen and conflicted over their positions. His jokes don’t make sense to Jubilee because she’s in a different mindset than Iceman. She’s second-guessing the X-Tremists and Bobby loves his job. Williams using humor (or the lack thereof) to get this point across is genius.

For some reason, Psylocke just hasn’t been in the limelight lately. After getting her “old” body back in HUNT FOR WOLVERINE: MYSTERY IN MADRIPOOR, I assumed Psylocke would get a more influential arc. I mean, she did switch bodies. That’s kind of a big deal, right?

Although I think most writers would agree that Psylocke went through a lot in 2018, few seem to deem her various ordeals panel-worthy. Williams hardly acknowledges Psylocke, even though she’s front-and-center on every cover and variant. Why did Marvel artists put her character towards the front of the group shot? Because they knew people liked her. Psylocke has a lot of fans.

She should be a significant character in the miniseries, but thus far AGE OF X-MAN: X-TREMISTS seems to be giving Iceman and Jubilee time to shine. While it’s always great to see these characters, I hope Betsy ultimately gets her place in the series as well.

AGE OF X-MAN: X-TREMISTS #1 is an issue that combines playfulness and sobriety, frequently seamlessly. This, for the most part, makes for a more intriguing issue. The only place it acts as a hindrance is in the art. I’m a little perplexed by Marvel’s choice of Charalampidis as the artist for the series. He’s talented, but his style just doesn’t make sense for the story. His figures and landscapes harken back to Saturday morning cartoons in their childlike expressions and designs.

AGE OF X-MAN: X-TREMISTS #1 Left Me Wishing for More

At the end of the issue, I sensed that characteristic tug that genuine comics always give: I needed to know what happened next. The notion of an illegal pregnancy in the utopian Age of X-Man is an engaging topic that leaves a lot of room for exploration. I truly do want to read the next issue of AGE OF X-MAN: X-TREMISTS…but not necessarily for the right reasons.

The art in AGE OF X-MAN: X-TREMISTS #1 didn’t excite, nor did the near absence of Psylocke. The blend of Iceman’s clumsy humor and the horror of the team’s job is unique, but that uniqueness won’t last forever. This series needs something more.

The Age of X-Man hasn’t been very dark. This miniseries is its opportunity to become darker. After all, the X-Tremists are proof that this “utopia” isn’t all that great. Giving Psylocke (and Northstar) a stronger presence and toning down the bright colors will help prove that.