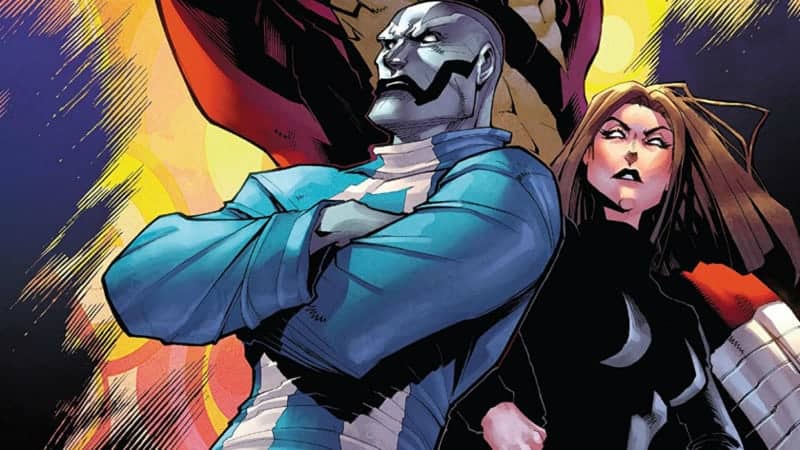 In the beginning, the Age of X-Man storyline excited me. The first few issues of each miniseries proved to be enthralling. Although a lot of readers disagreed with me, I found the idea of the arc an appropriate homage to the Age of Apocalypse while still being original. Things were looking up…until I saw how long the Age of X-Man was set to last. This thing has gone on for months and months and we’re only a little over half-way through. While some recent Age of X-Man issues have still been enjoyable, this week’s AGE OF X-MAN: APOCALYPSE AND THE X-TRACTS #3 is a perfect example of why this storyline needs to end.

The unique nature of the Age of X-Man has worn off, leaving a mundane and predictable plot in its wake. AGE OF X-MAN: APOCALYPSE AND THE X-TRACTS #1 was a strong issue, which makes me think that perhaps this miniseries was better suited to be a one-shot. Writer Tim Seeley knows how to write a good story, but the way Marvel set up the Age of X-Man (with a million things going on at once) leaves Seeley little room to be creative. On top of that, Salvador Espin’s heavily stylized art continues to disappoint. While whimsical art can work for a series such as this one, Espin takes it a little too far. 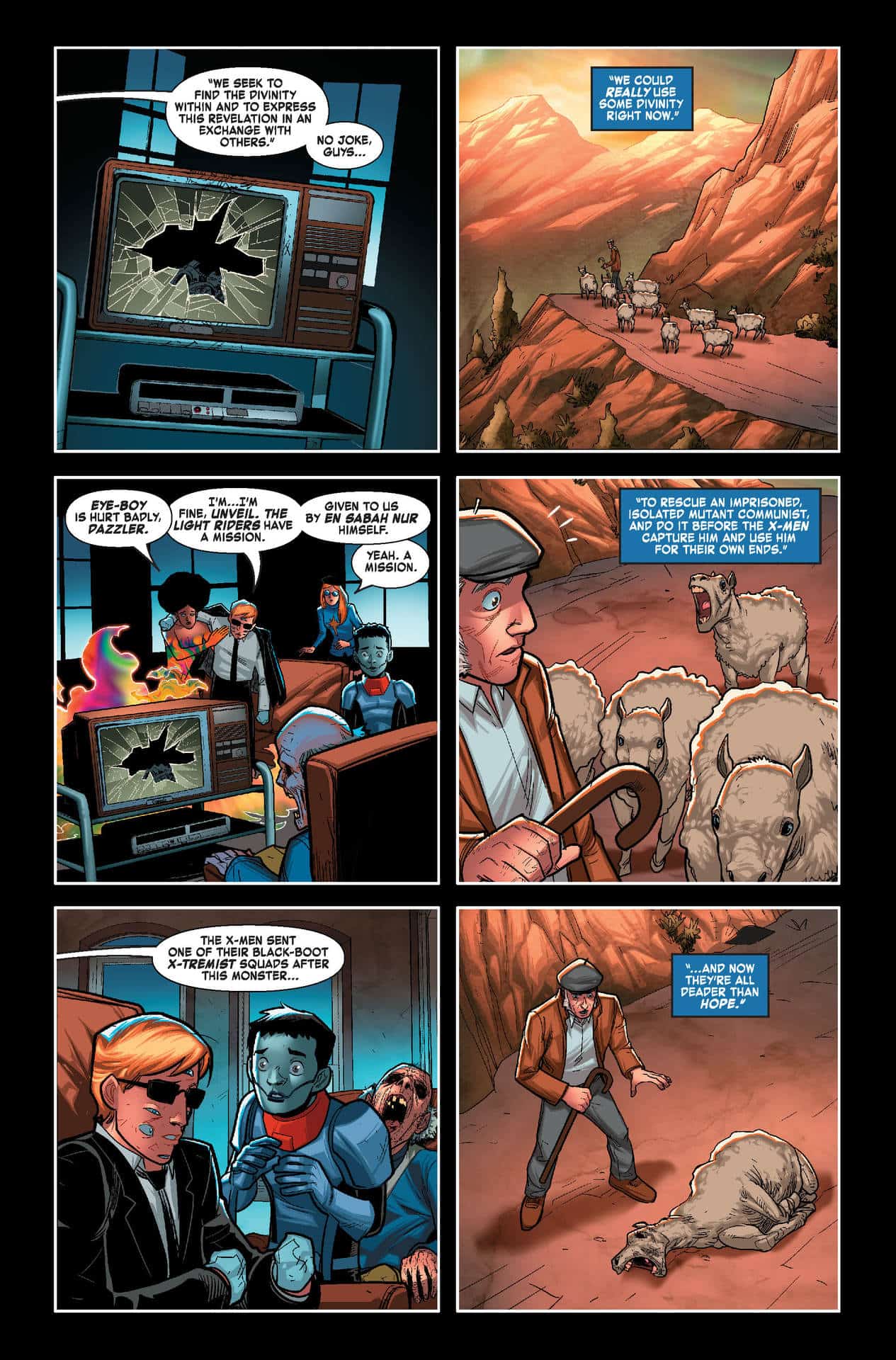 From Weird to Worse in AGE OF X-MAN: APOCALYPSE AND THE X-TRACTS #3

AGE OF X-MAN: APOCALYPSE AND THE X-TRACTS #3 isn’t full of filler content but, at the same time, it sort of is. Things do happen in this issue: Dazzler fights Omega Red, Apocalypse beats up Colossus for talking to Kitty, and, in a very uncalled for twist, Evan suddenly becomes Captain America. Still, somehow, with all of that going on, the issue’s content reads like filler. In the larger scheme of the Age of X-Man, nothing that happens in AGE OF X-MAN: APOCALYPSE AND THE X-TRACTS #3 is especially important. It feels like Seeley is just waiting (like all the other Age of X-Man writers) to finally wrap this thing up.

Where is the Age of X-Man Going?

That’s the big question in this giant, sprawling storyline. With so many Age of X-Man titles, I assumed that this arc would have a lot to say. But, as each issue comes and goes, I’m starting to think the Age of X-Man was never really meant to excite readers (at least not by the end of it). Instead, this storyline is acting as a way to separate the vast majority of the X-Men from the other, larger Marvel crossovers (a.k.a. War of the Realms). They kept more popular characters like Wolverine and Cyclops on Earth-616 and threw out the rest of them. Why would Marvel want to do that? The answer is pretty simple; it’s because of AVENGERS: ENDGAME. 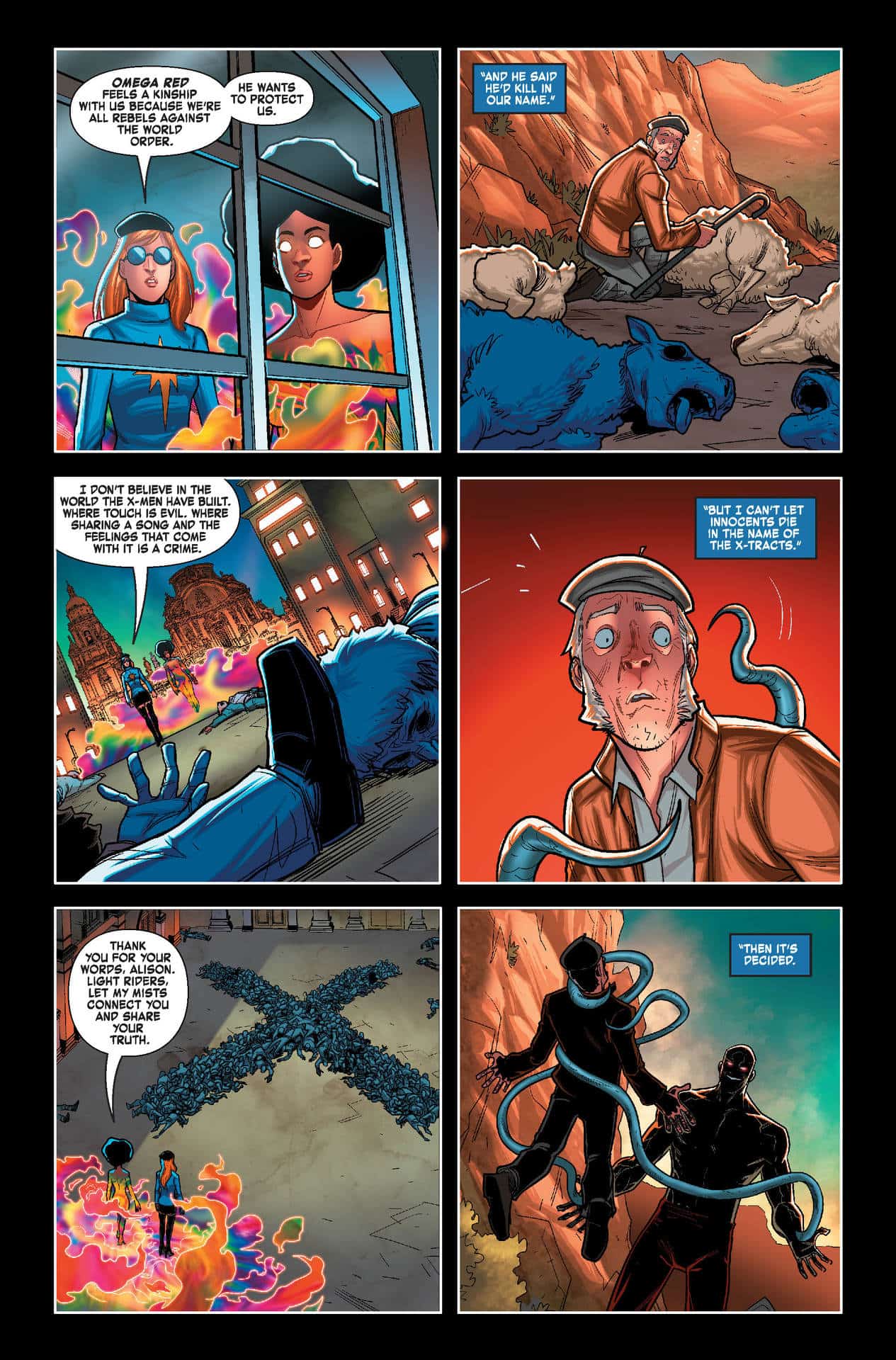 I hate to say it, but sometimes the MCU doesn’t have the best effect on Marvel comics. Frequently, the higher-ups in Marvel decide they want to move things around in the comic-verse (see what I did there?) to make it appear more like the MCU. This allows movie fans to easily become comic fans. It’s a smart move and can oftentimes lead to some great comics…unless you’re an X-Men fan. Because the X-Men aren’t currently in the MCU, Marvel appears to be corraling them off from other characters. Sending them off to an alternate reality is a pretty great way to do that.

I’m not necessarily mad about all of that. If Marvel wants to make the comics more movie-oriented, that’s fine. If they want to keep the X-Men separate, that’s (mostly) fine too. However, they still have to give X-Men fans a decent story that doesn’t obviously fill such a shallow purpose. If they keep this up, there won’t be too many X-Men fans left. 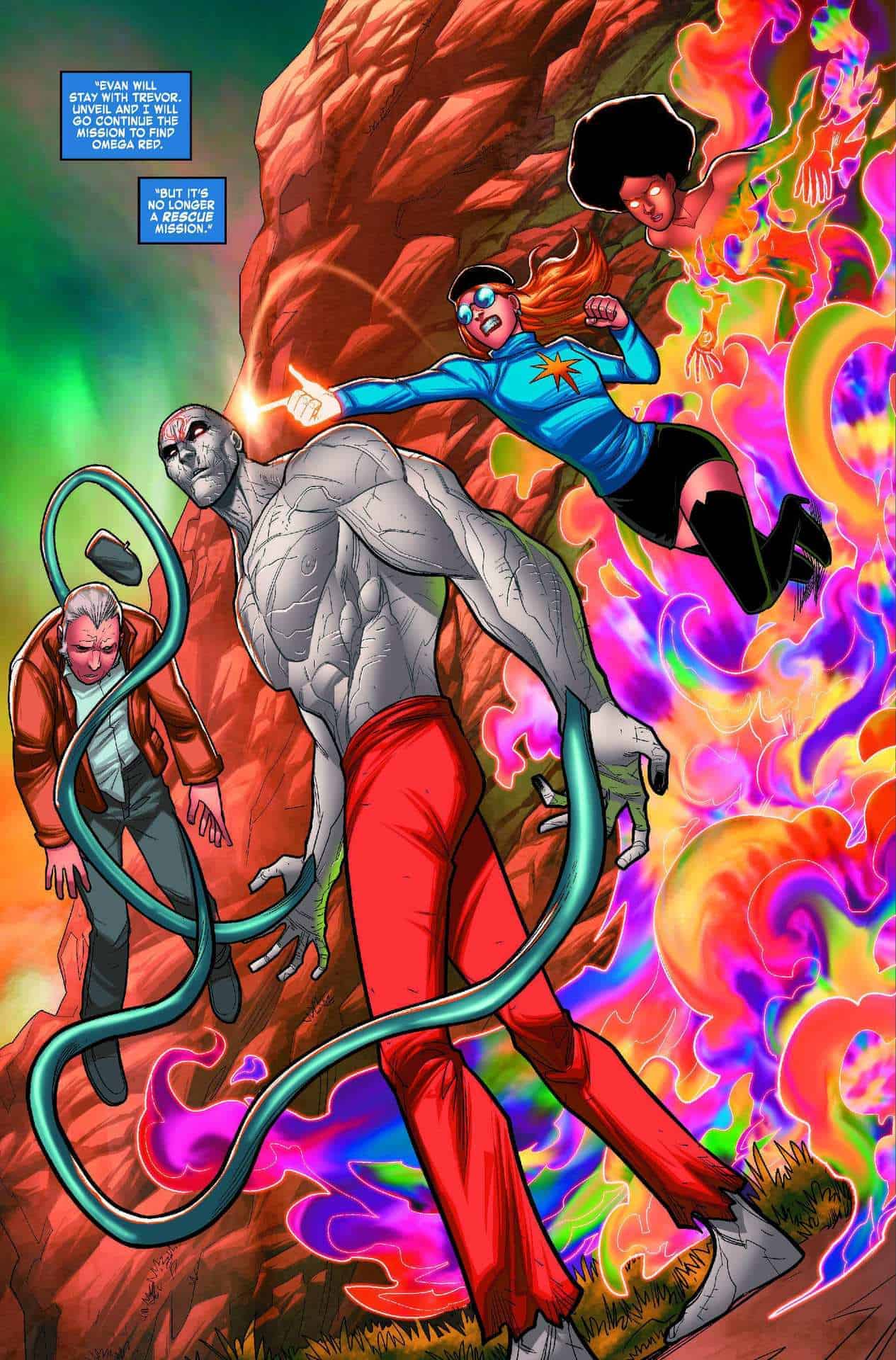 Is There Anywhere to Go?

If the Age of X-Man is purposefully stagnant, that leaves its writers in a hard place. I think that AGE OF X-MAN: APOCALYPSE AND THE X-TRACTS #3 writer Tim Seeley could easily give X-Men fans a well-done series with tons of great characterization and interesting plot points. The problem is, he has very little to work with. Nothing huge can happen in the Age of X-Man at the moment because there are so many titles and each title has to react to large events. It’s become an idle behemoth of a crossover that no one (writers included) seem to be enjoying. 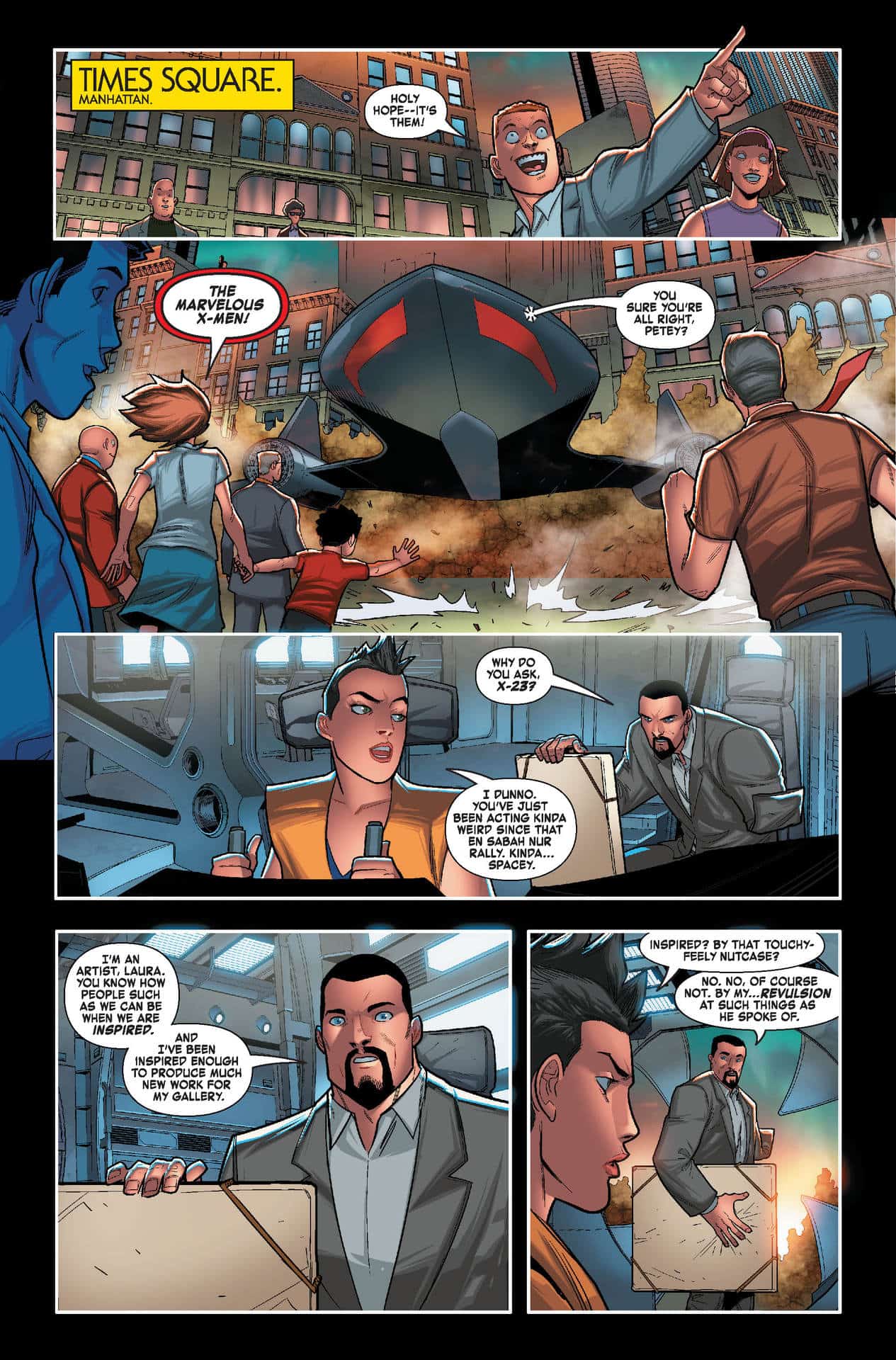 Perhaps the best and worst part about AGE OF X-MAN: APOCALYPSE AND THE X-TRACTS #3 is the characterization. As I said, Seeley does try. He gives Eyeboy and Genesis a tender moment that might just be the best scene in the issue. Apocalypse shows off his true colors in a somewhat overdramatic scene between him and Colossus. Characters do grow in AGE OF X-MAN: APOCALYPSE AND THE X-TRACTS #3, but they also regress. Colossus and Kitty’s budding romance is old news at best. Their almost-wedding officially ended things between them…so why is Seeley pushing them together again? Evan’s connection to Apocalypse doesn’t need further exploring after his previous storylines. Like a lot of things in the Age of X-Man, the characters are (at least in a few instances) stagnant.

Espin brings a unique and heavily stylized approach to comic art in AGE OF X-MAN: APOCALYPSE AND THE X-TRACTS #3 that, in all honesty, just doesn’t belong. For an Indie comic or a children’s graphic novel, his whimsical and cartoonish style would work. But, for the Age of X-Man, it makes it feel like this story is a joke (which it’s almost turning into…). 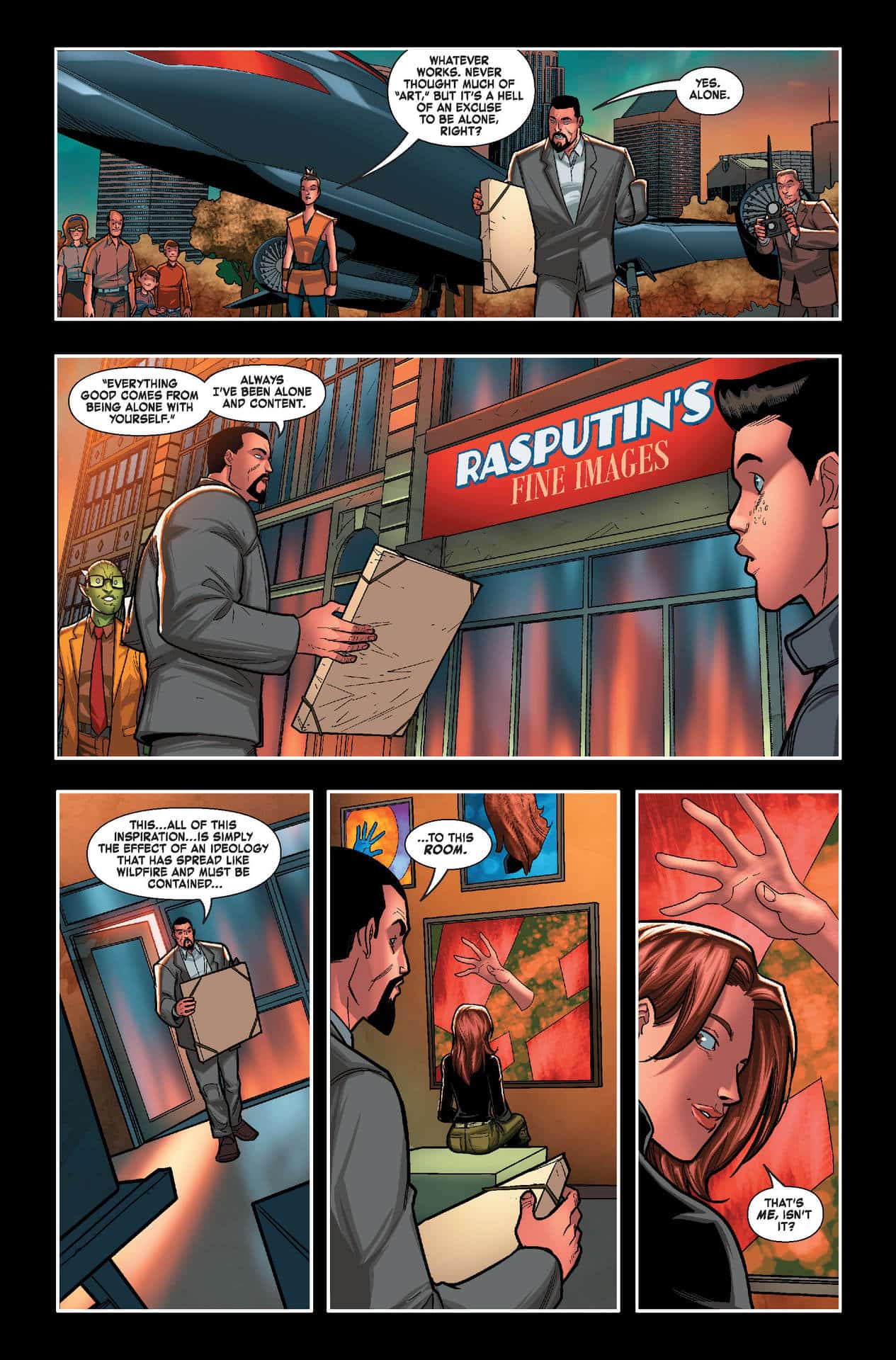 Colorist Israel Silva gives the issue a heavily saturated palette, which, considering the 1960’s vibe this miniseries seems to be going for, makes sense. However, paired with Espin’s lines, it becomes, once again, a little too childish. A dash of artistic realism could help remind readers of the solemnity this miniseries should (sometimes) have.

What Could’ve Made AGE OF X-MAN: APOCALYPSE AND THE X-TRACTS #3 Better?

With the way the Age of X-Man is going, I don’t think there was much Seeley could’ve done to improve this issue. Taking out the bit about Evan becoming a weird version of Captain America and Colossus crushing on Kitty would’ve helped, but it still wouldn’t have been a great issue. The Age of X-Man was fun for a little while, but at this point, it just needs to end. As much as Marvel doesn’t seem to want it, the X-Men need to come back home.